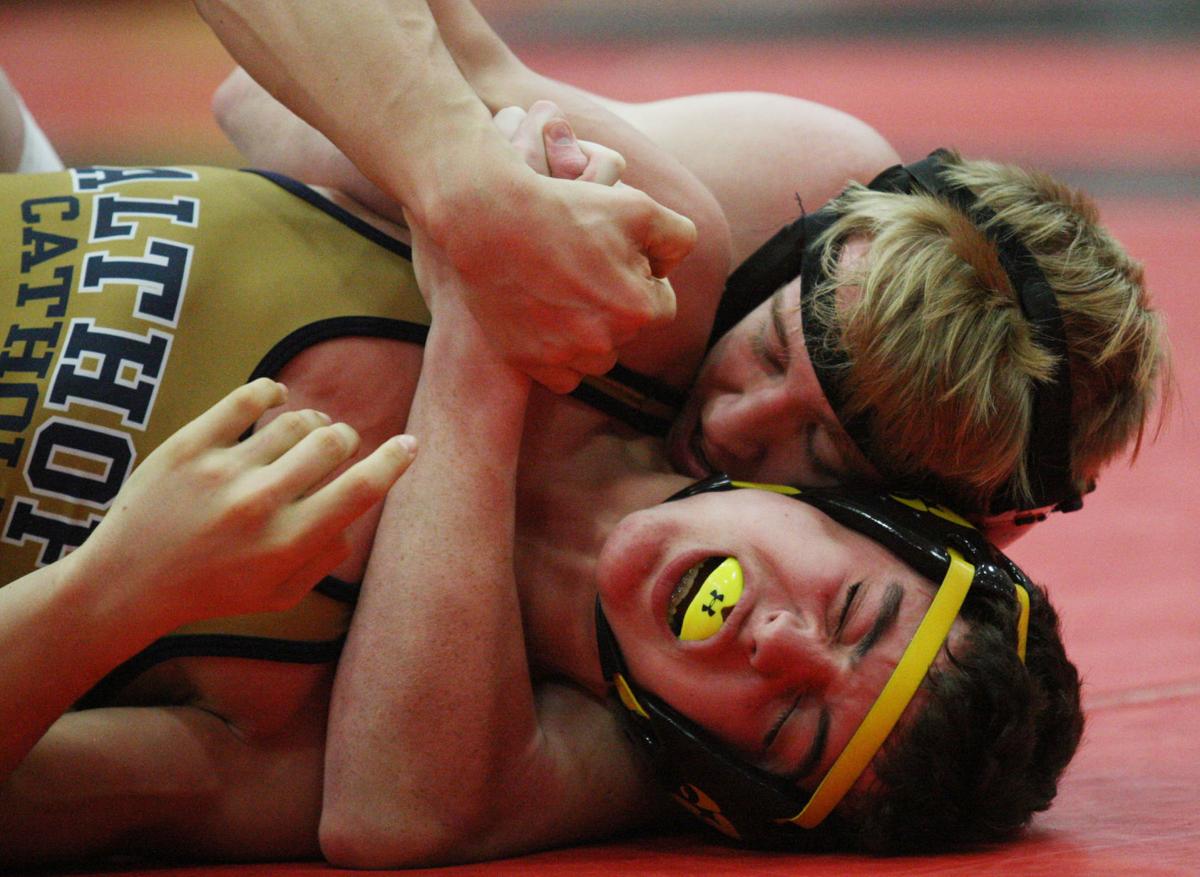 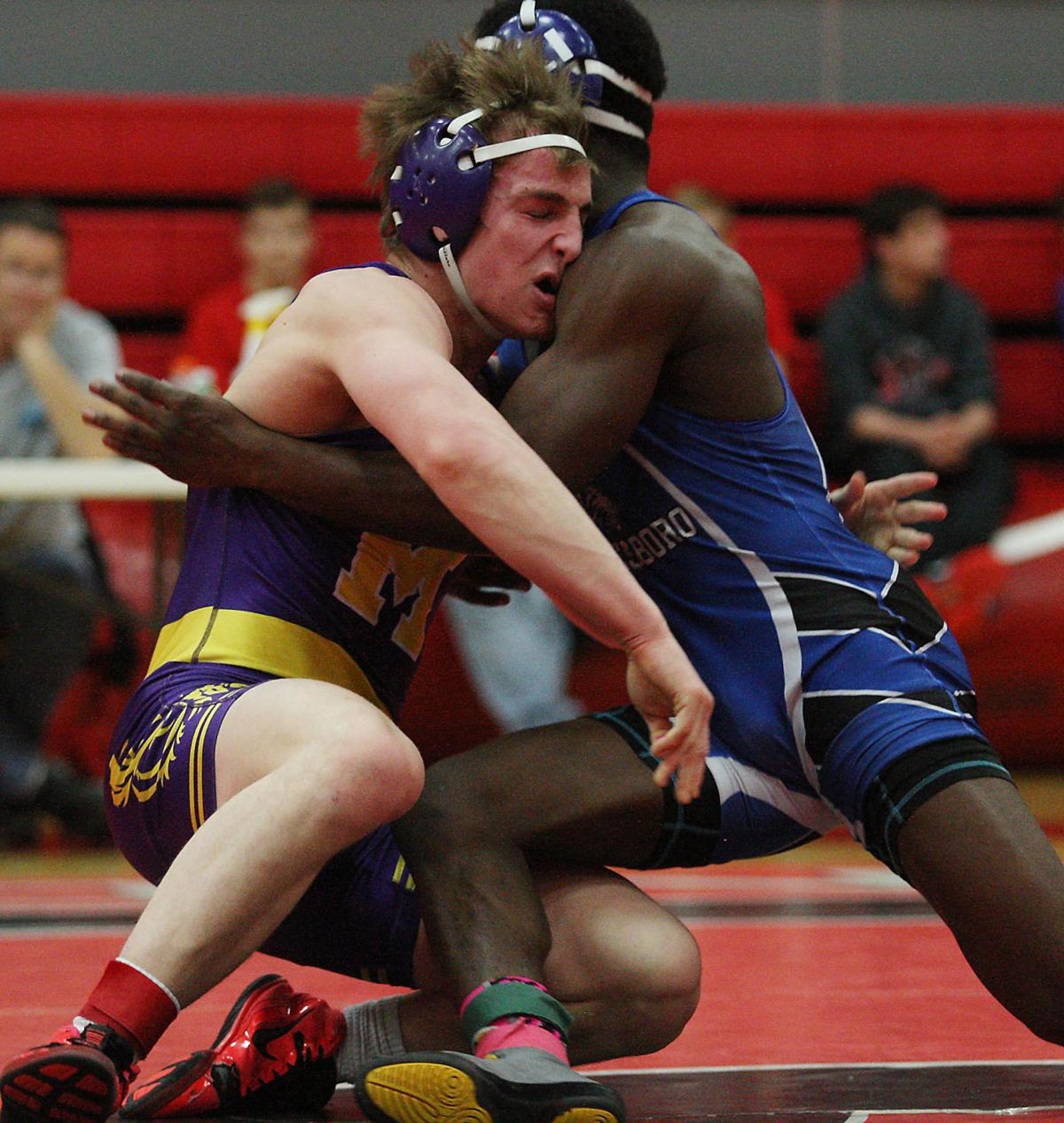 Monticello’s Kaehl VanDalsen, left, and Anna-Jonesboro’s Arieh Hart struggle for the upper hand during the 152-pound third-place match. Hart won the match, but VanDalsen advanced to the state tournament. 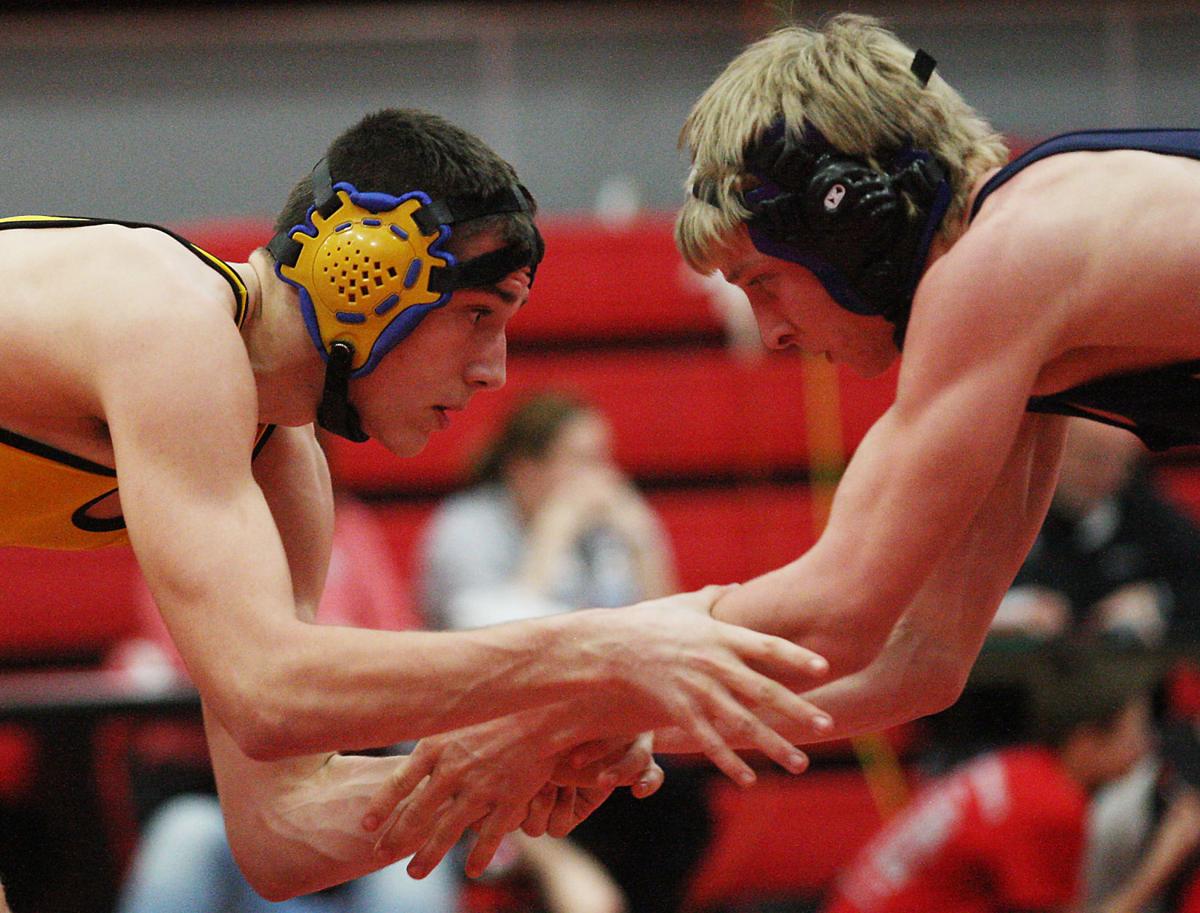 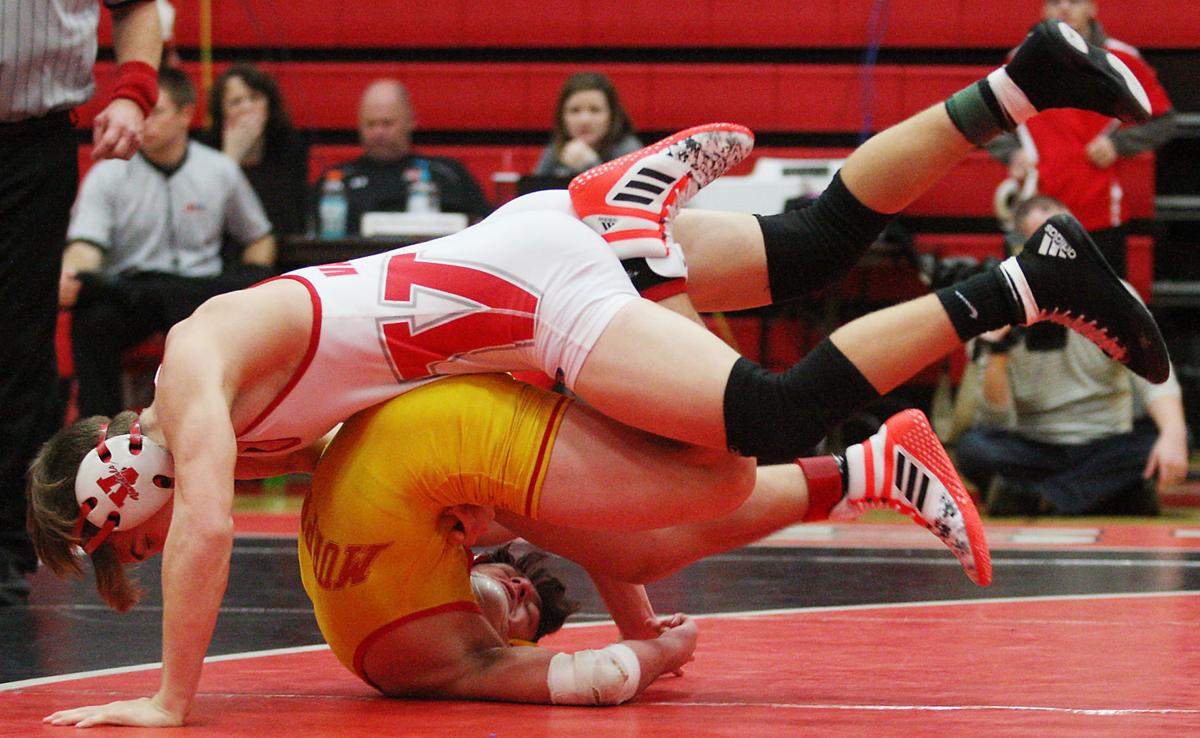 Vandalia’s Jarrett Paslay attempts to take down Murphysboro’s Sam Dietz as Dietz tries to roll out of it during the 126-pound third-place match at Vandalia.

CLINTON – Micah Downs came into the weekend's Class 1A Clinton Sectional well under the radar. He's not leaving that way.

Downs left the wrestling meet on Saturday with a second-place trophy and a berth in the state meet in Champaign.

He was part of a strong contingent of Maroons that qualified six wrestlers for state, which runs Thursday through Saturday at the State Farm Center.

“I was really excited for the boys. They wrestled well and deserved what they got today,” said Clinton coach Matt Cooper, who began the season expecting maybe to get four through. “To get six kids out, that's phenomenal.”

He called Downs maybe the biggest surprise. And he would definitely have company with that.

Downs is a freshman competing at 195 pounds against mostly juniors and seniors who have added years in the weight room. He also came into sectionals unranked by illinoismatmen.com. His record was a modest 12-5.

But Downs had missed quite a bit of time after breaking his hand. And he had the experience to lean on of being a second-place finisher at 185 pounds at last year's IESA state meet.

A healthy Downs used his skills well. He won two matches on Friday and then topped No. 12 Mason Moore of Stanford Olympia 6-2 on Saturday morning.

Downs fell to No. 5 Cade Kerns of Prairie City in the championship match but had already punched his ticket.

He will be joined by brothers Kolby Winter (152) and Logan Winter (182). Both had some tense moments in their paths.

Kolby Winter won his first match 9-7 and escaped with a 10-8 win in the semifinals. Then he almost got No. 5 Trevor Bulington of LeRoy is the final before losing 5-2.

Older brother Logan, ranked No. 1, made it back to state by winning all three of his matches. He won his semifinal 7-5 and then got a late reversal to win his final 7-6.

“He's done really well,” Cooper said. “He's wrestled to the best of his ability out there. He's really focused to get that title this year.”

Tristan Overvig came into the Class 1A meet with confidence.

“He told me he thought he had a good shot at state and I thought he was kidding me,” Cumberland coach Jim Miller said.

But Overvig got it done, winning two matches on the first day and then needing to work through wrestlebacks for a fourth-place finish to be one of three Pirates wrestlers to make it through.

Highlighting the team's effort was Konnir Hinz, who won at 145 in impressive fashion to run his record to 39-5.

“He's been wrestling well and put a lot of time in this offseason,” Miller said. “So he's put in the work and it really shows.

“I thought we had him well prepared going in. He knew what to expect.”

Anthony Enlow was the area's other sectional champion as the Vandalia freshman emerged from the 285-pound group. He defeated No. 5 Brett Nyswonfer of Roxana 1-0 in the final.

Enlow is one of seven Vandals who will compete at state.

Mattoon's two studs made it through, even though it came with some excitement. But coach Brett Porter was just as happy to see two of his other wrestlers make state.

While Trevor Edwards (113) and Garrette Branson (220) won their weight classes, Hayden Stanley (106) became the school's first freshman to make state in more than 35 years by placing second and Jayvin Quinn was fourth at 145 to make it four Green Wave wrestlers going to state for maybe the first time in school history.

Branson, ranked No. 2 in the state, ran his record to 35-0 but had his work cut out. He went up against Urbana's Luke Luffman (ranked No. 4) in a semifinal. The two had gone to overtime earlier this season and it was close again.

“It came down to a penalty point,” Mattoon coach Brett Porter said. “They were both wrestling real aggressive. The ended up wrestling in the bleachers. Luke just didnt stop when the whistle was blown. They wound up four rows into the bleachers to that cost him a point.”

Branson won 5-4 and then defeated No. 8 David Griffet of Mahomet-Seymour 10-5 in the final.

Mount Zion also had a big day, getting two wrestlers to advance. Tyler Bennett (138) continued his strong senior season by winning four straight matches. His road included a 5-3 semifinal victory over No. 3 Will Meador of Carbondale.

The other Brave to advance was Peyton Mahan (126), who won four matches in wrestlebacks to place third.

Monticello’s Kaehl VanDalsen, left, and Anna-Jonesboro’s Arieh Hart struggle for the upper hand during the 152-pound third-place match. Hart won the match, but VanDalsen advanced to the state tournament.

Vandalia’s Jarrett Paslay attempts to take down Murphysboro’s Sam Dietz as Dietz tries to roll out of it during the 126-pound third-place match at Vandalia.