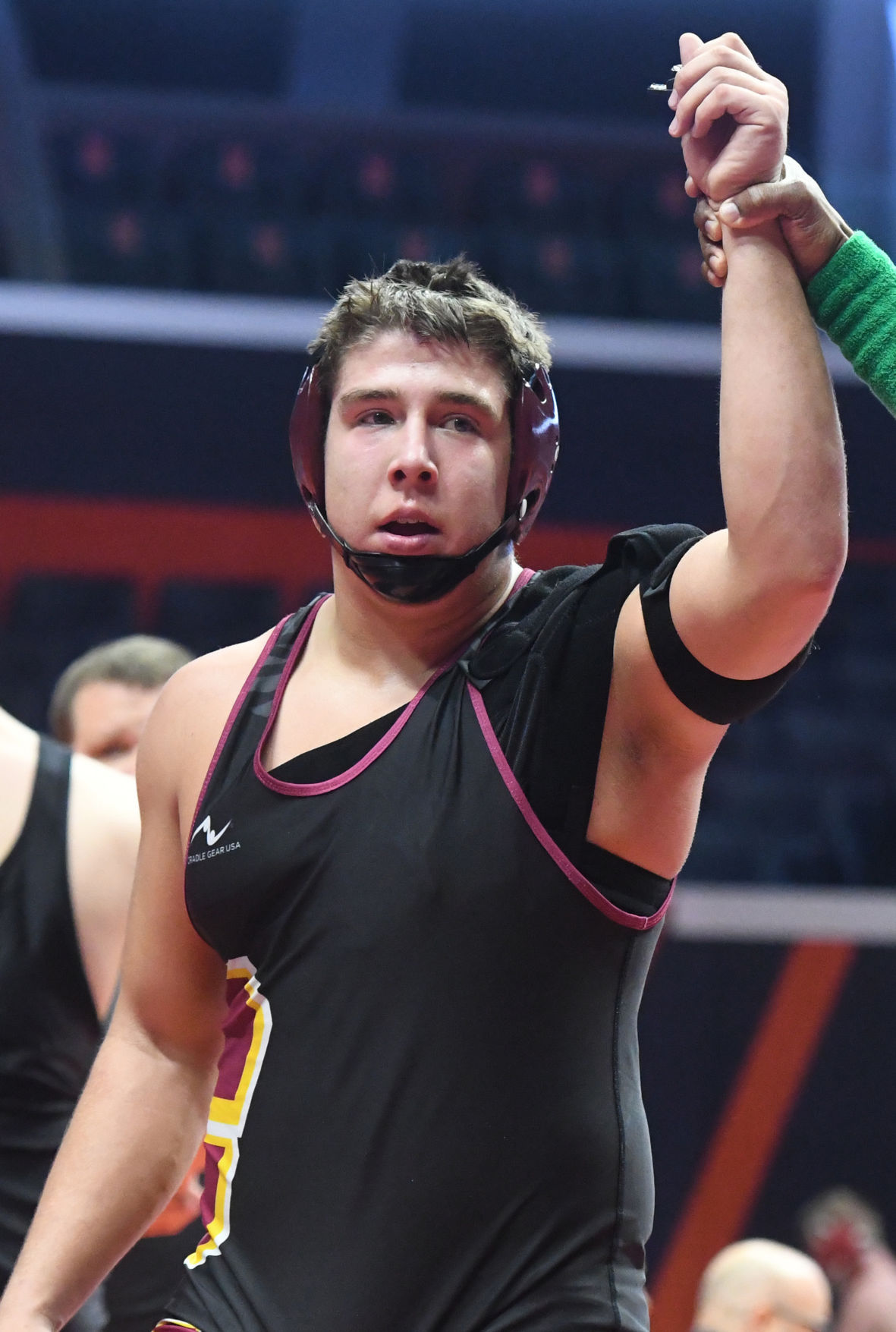 Clinton's Kyle Hammer defeated Hillsboro's Jordan Gregg in the Class 1A 220 pound preliminaries Thursday during the IHSA state finals at the State Farm Center in Champaign. Online gallery at herald-review.com/gallery 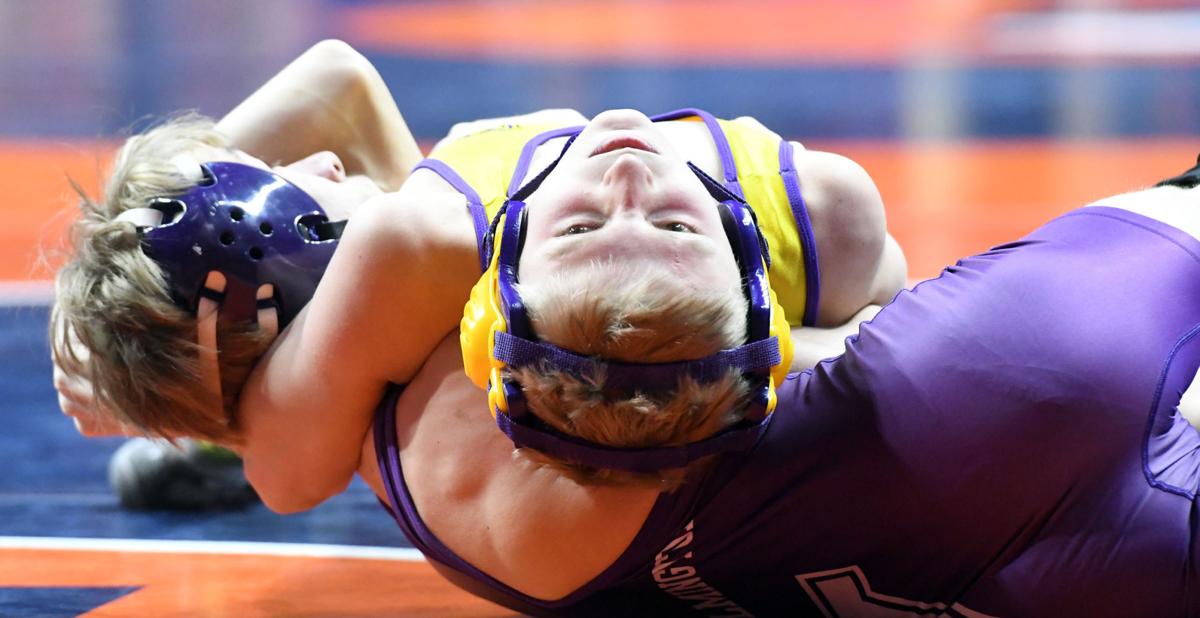 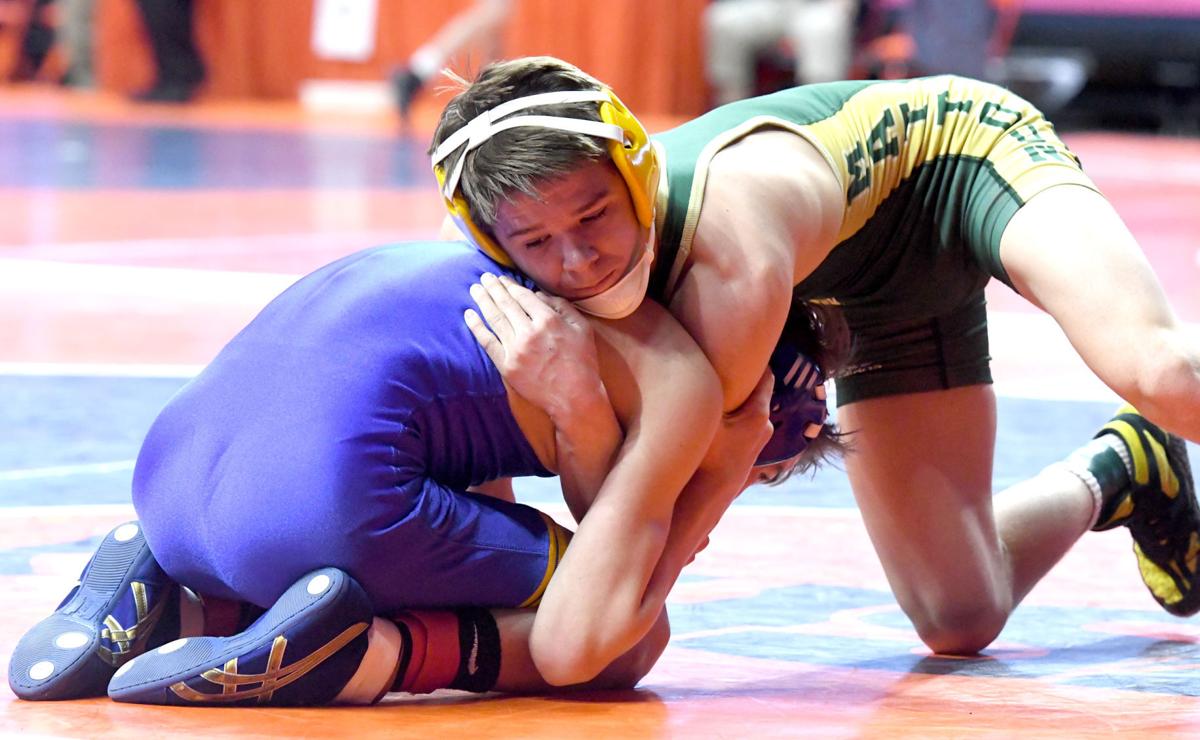 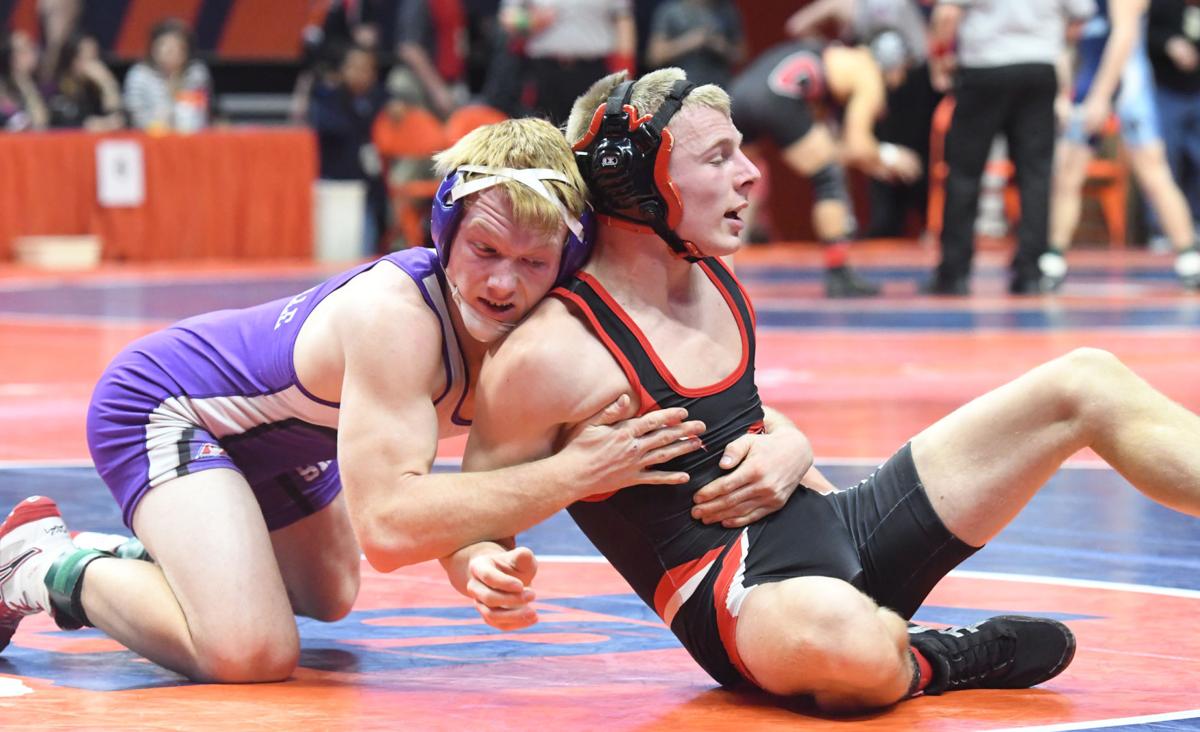 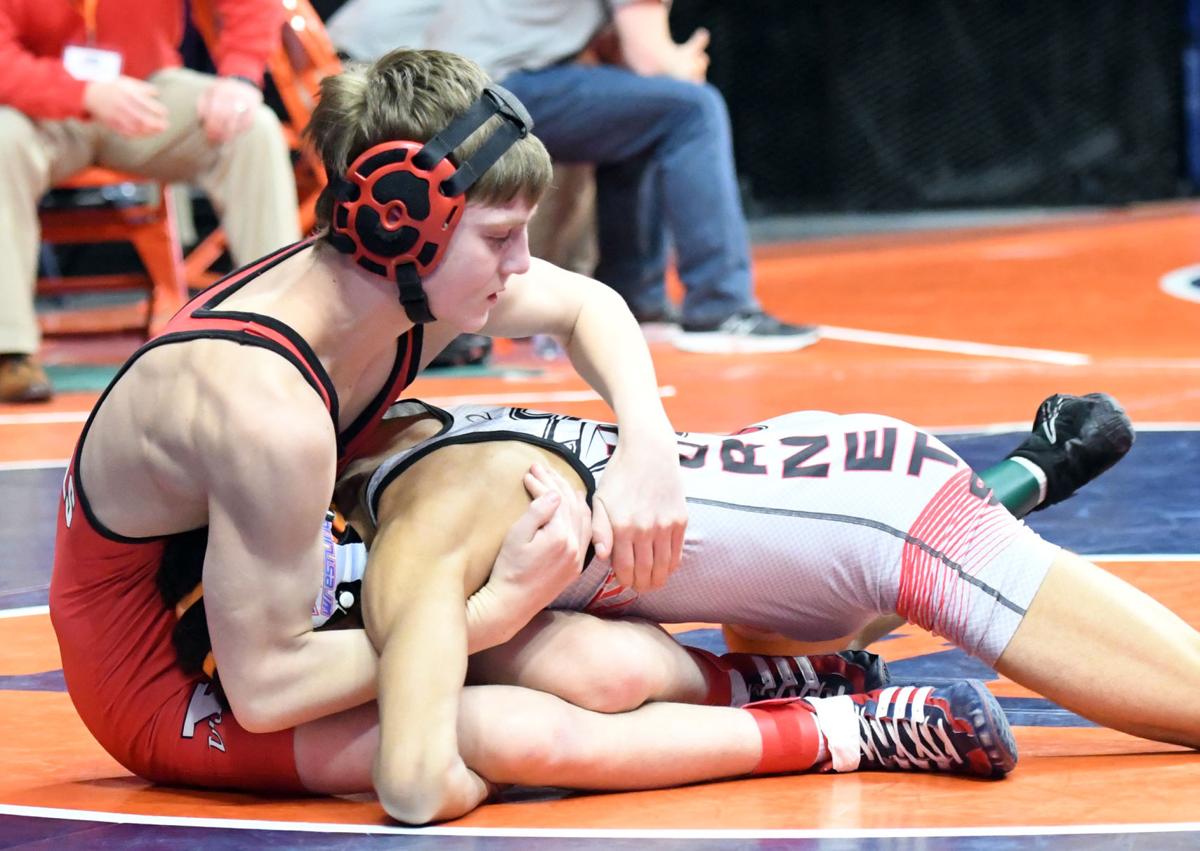 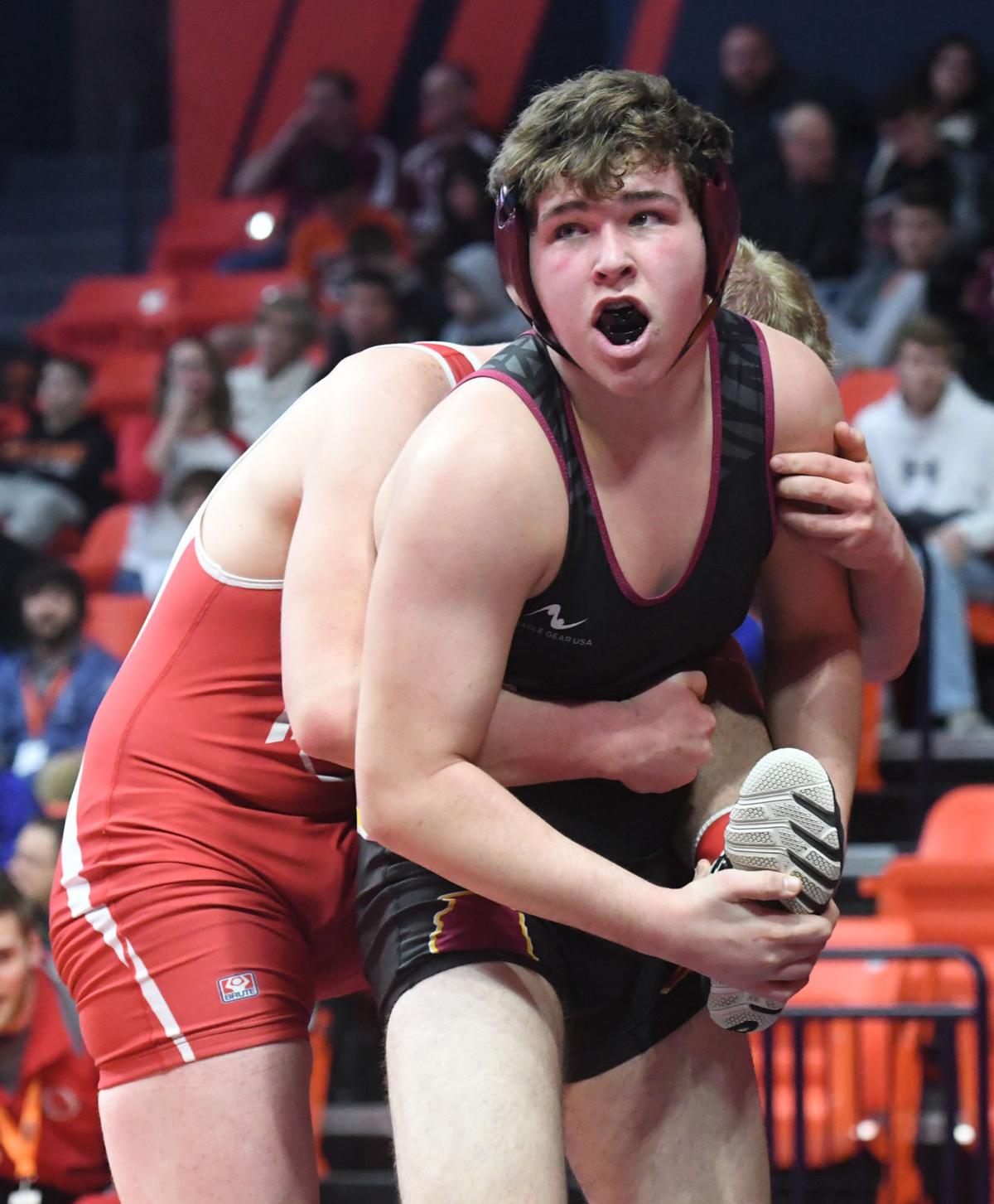 Clinton's Micah Downs was defeated in his match against Oregon's Anthony Marchetti in the Class 1A 195 pound weight class Thursday. 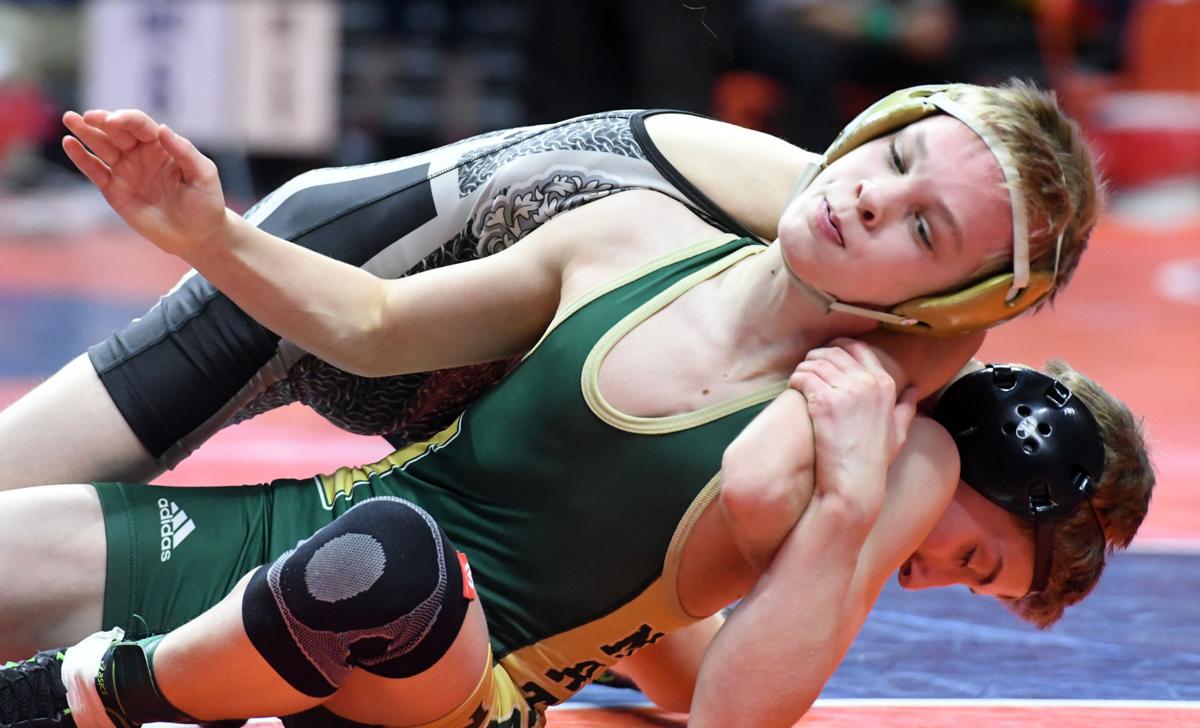 CHAMPAIGN -- Matt Cooper had to keep his head on a swivel.

Near the end of a long afternoon, the Clinton coach hurried from one mat to another, making sure Kyle Hammer would have at least one coach on the sidelines.

It was a good problem for Cooper at the IHSA wrestling state tournament Thursday. After waiting all day for one match each of the last three years, Cooper spent his day moving from one state qualifier’s match to another – six in total.

It ended with Hammer, a junior in the 220-pound weight class, surviving a late charge to advance to the quarterfinals in his first state tournament. Hammer was up 4-1 heading into the third period, but a mistake erased that lead. He regrouped, found two points and never let go. Hammer beat Hillsboro’s Jordan Gregg 6-4 to give the Maroons two wrestlers going on to the quarterfinals.

“I was really hoping he wouldn’t do anything funky and get me out of position,” Hammer said. “He’s big and strong, and I tried to hold him down the best I could.”

Cooper’s been working on bringing Clinton’s program back to prominence, and perhaps no one shows that more than Hammer. Last year, Hammer just missed out on advancing to sectionals, dropping a 1-0 third-place match. The junior said his style and confidence is much different from last year -- now he’s 32-7 and guaranteed at least two matches at the second day of state.

“This season was really technique more than anything. Last year, I really didn’t wrestle that well. I was more timid than anything because I was an underclassman,” he said. “But this year, I worked on technique and got my mind right. Hoping – well not hoping – but knowing that I was going to win. Having that mindset.”

Hammer said that started a little more than a month ago. At the New Year’s Challenge in Danville, Hammer took on Bismarck-Henning’s Cody Miller. Miller, ranked fourth by Illinois Matmen and a fellow quarterfinalist, beat Hammer 3-2 but it came in double overtime.

“At that point, I knew I could really do something,” he said.

“I even take it back to last year with the fresh/soph series,” he said. “Light bulb kind of came on for him, he can figure out that he can do this.”

Hammer said having Cooper, a state medalist in 275, as a coach is valuable.

“It’s great,” the junior said. “He’s experienced every little position I’ve been in because he wrestled close to the same weight class. Everything he does works right on to us, it works out great. He knows exactly what to say and when to say it.”

Hammer’s dad, Don, took fourth at state back in 1991. So there’s a natural goal to beat out what his father did.

While Hammer came out victorious in a close match, Clinton’s luck wasn’t quite as good the rest of the day. Logan Winter advanced without any problems, but Micah Downs (195) and Kolby Winter (152) both lost in one-point matches.

The younger Winter was moments away from a win. Down 4-3, Winter got into a good position on Chicago Bowen’s Cameron White and the referees’ arm was swiping away. But the clock hit zero a little too soon.

“He had the cradle locked up, but the kid was athletic enough to hold off,” Cooper said. “Another half second, the guy was swiping for two. I went to the table and asked, but he said he only got half a swipe in after that first one. So it’s a tough loss for him. He battled as hard as he could.”

Downs' match thrilled in the final two minutes as well. The freshman was down by two in the third, but aggressively took charge and tied it up before taking a 5-3 lead. But Oregon’s Anthony Marchetti roared back, escaped and scored the winning two points with seconds left. Marchetti won 6-5.

Downs is a freshman who missed most of the season with a hand injury. So, Cooper didn’t really have expectations of what he would be able to accomplish, especially since he’s wrestling up a weight class with Logan Winter in 182. But it helps having two state wrestlers to spar with in Winter and Hammer every day.

Downs coming as close as he did to advancing left Cooper encouraged.

“I didn’t really know what to expect from Micah, not going to lie,” he said. “That’s a tough transition from junior high to high school.

“I think Micah gets lost in how good he actually is. He’s battling these kids every day. It’s really good for him.”

The Maroons’ other two wrestlers were close as well. Christian Reynolds (138) dropped a 6-0 decision to Lisle’s Drew Sonnefelt, and Luke Shobe (170) lost 6-2 to Sherrard’s Tyler Roling. Both will have to wait until this morning to find out if they advance into wrestlebacks.

CHAMPAIGN -- Vandalia knew it would have a tough Thursday with a couple of wrestlers going up against top-ranked competition.

Clinton's Kyle Hammer defeated Hillsboro's Jordan Gregg in the Class 1A 220 pound preliminaries Thursday during the IHSA state finals at the State Farm Center in Champaign. Online gallery at herald-review.com/gallery

Clinton's Micah Downs was defeated in his match against Oregon's Anthony Marchetti in the Class 1A 195 pound weight class Thursday.