SPRINGFIELD — Before MacArthur's Cameron Lee took the mat at the Illinois Wrestling Coaches and Officials Association (IWCOA) Class 2A State Wrestling Tournament in Springfield on Friday, his MacArthur wrestling coach Alvin Jackson sent him a message to mentally prepare the Generals senior for the challenge ahead of him.

Jackson coached Lee during the school year competitions but as the regional, sectional and state tournament were not sanctioned by the IHSA and were instead run by the IWCOA, Jackson hasn't been coaching in-person during Lee's playoff matches. Still, Lee's success was the first thing on Jackson's mind.

"Good luck to you young warrior. Do What you do. Just remember this, your conditioning and strength is superior to most everyone you wrestle," Jackson texted Lee. "Keep them under pressure and leave your energy on the mat. Finish all technique with authority. Be a little mean and tough tomorrow. I have no doubt you'll make the podium."

Lee took Jackson's words to hear and did just that, finishing with a sixth-place medal at 113 pounds in his third state tournament of high school career. Lee finished the season with a record of 15-4.

The senior started his day with a decision victory over Grayslake Central's Tyler Weidman 8-3 and followed it up with a major decision, 19-6, over Sammy Niyonkuru from Rock Island.

In the semifinal match, Lee was defeated in a major decision 9-1 and in the 5th-place match he faced Charlie Fitzgerald of Woodstock Marian. The match was tied 6-6 after the three rounds and Fitzgerald won 8-6 with a sudden victory in overtime.

"Cam has been so determined all year and he has worked so hard this season," Jackson said.

Along with his high school training, Lee has trained with Millikin wrestler Eli Wall-Lampkin during the season and where Lee will wrestle in college has yet to be announced.

The Green Wave junior won his first three matches behind strong performances to advance to the state finals. In the first round, Foster pinned Olin Walker from Chicago St. Patrick at :32. In round two, Foster didn't allow his opponent, Rock Island's Daniel McGhee, to score a point in the 8-0 major decision.

"(Brady) wrestled really well. At that weight, a lot of kids wrestle differently so you have to adapt to that," Mattoon wrestling coach Brett Porter said. "In each match, he had to wrestle a different style, whether it had to be takedowns or having to ride on top."

In the semifinals, Foster defeated Edgar Albino Jr. from Antioch in a 6-1 decision to move on and face the weight class' No. 1-seeded wrestler Gylon Sims from Joliet Catholic Academy in the finals. In a tight match, Sims won a decision, 4-2, giving Foster the silver medal.

"In the finals, it could have gone either way. Brady just came up a little bit short. He had an opportunity to tie the match up in the closing seconds and it just didn't work out," Porter said. "4-2 is a close match so I'm proud of him. I thought Brady had a great tournament and he had three tough matches to finish it out."

Duncan picked up wins over Johnathan Olivio from Burbank St. Laurence (pin at 1:23) and Bruce Moore from Geneseo (decision 4-3).

In the championship semifinals Duncan faced Benjamin Shvartsman from Deerfield and lost a decision 7-0. During the match, a previous knee injury limited Duncan's effectiveness and he withdrew from his remaining wrestleback matches, including the fifth-place match against Andrew Kested from Sterling.

"Kiefer made it to the semifinals and he decided to pull out because he had been having trouble with a nagging injury," Porter said. "He thought going into it that he could place and it was a big relief to get into the semifinals. I just think he wanted to see how far he could go and, after the semifinal match, he realized it would not be good to continue wrestling with the knee."

Before exiting in the wrestlebacks, Mattoon sophomore Kyus Root won his first match of the day, a pin of Colin Ashley from Chicago Brother Rice at 1:19. This gave all three Green Wave wrestlers pin victories in their first-round matches.

"All three wrestled great right out of the gate. 182 pounds is a big-boy weight class and you get a lot of juniors and seniors at that weight," Porter said. "As a sophomore, Kyus doesn't need to put his head down and if he wants to do better next year, he will have to put the time in.

"I'm proud of the kids and I know this was a crazy hectic season and these guys have really stepped up. They have been motivated all year and I'm super proud of them."

DECATUR — When Millikin wrestling coach Ryan Birt brought his team to the CCIW Tournament in February, he wasn't expecting to set the team rec…

DECATUR — Millikin senior Bradan Birt was named the CCIW Wrestler of the Week on Tuesday.

Briefly, it looked like Millikin wrestling would be robbed of a postseason again.

Division III sports will not have winter sports championships.

Watch now: Reaction to Cincinnati Bengals loss to the Bears

Watch now: Reaction to Cincinnati Bengals loss to the Bears 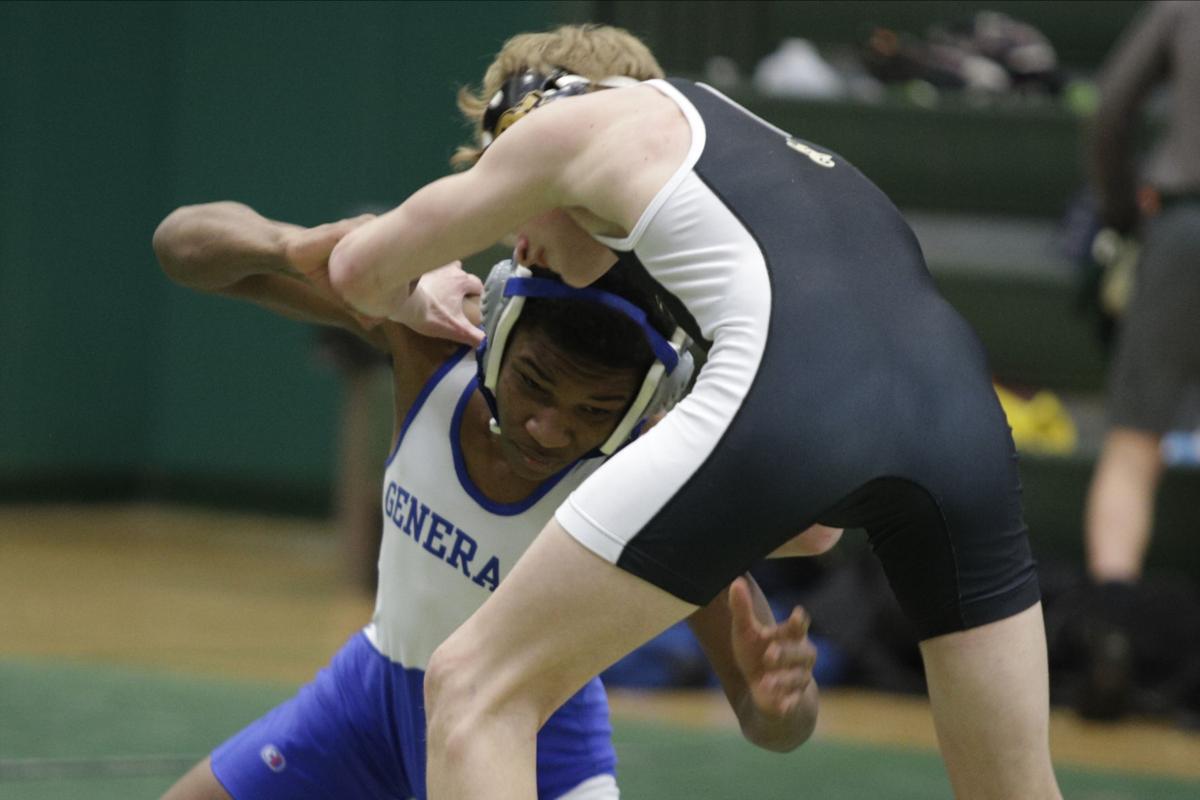 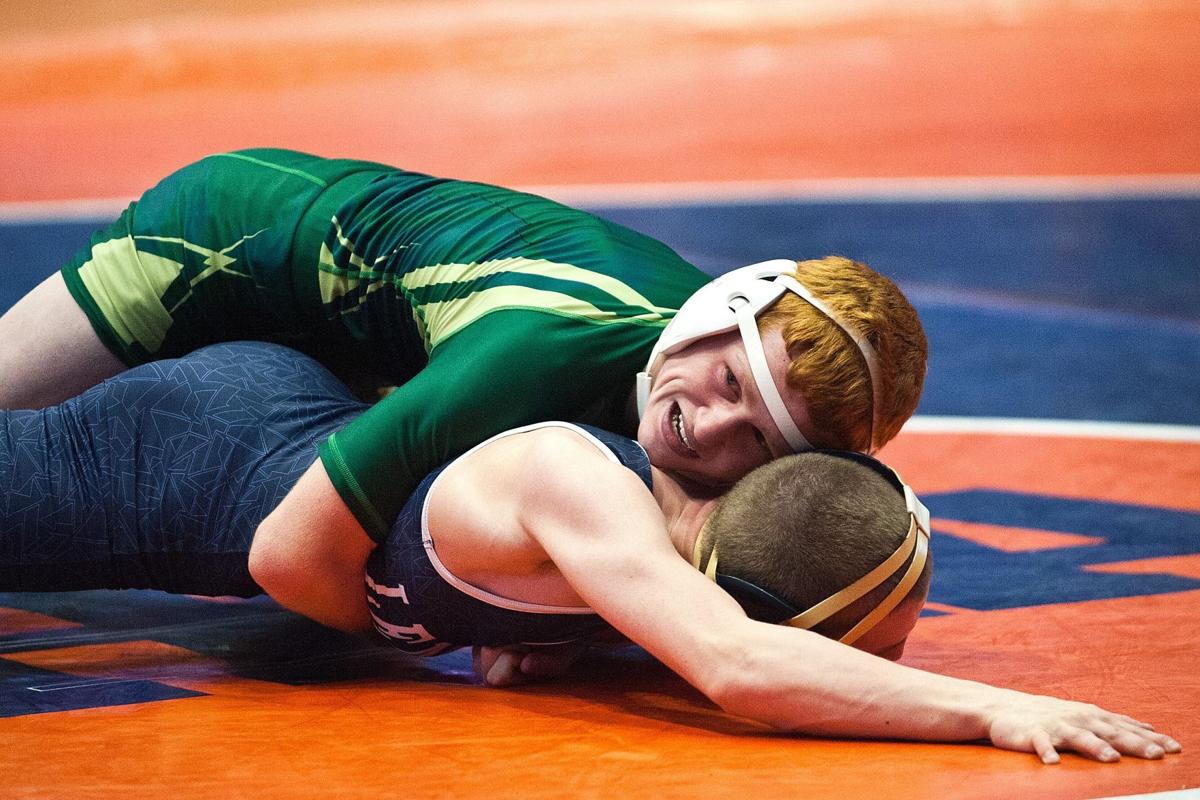 Mattoon's Brady Foster (green) wrestles at the Class 2A dual team state meet in  2020. Foster finished second at 106 pounds at the IWCOA Class 2A state tournament on Friday.