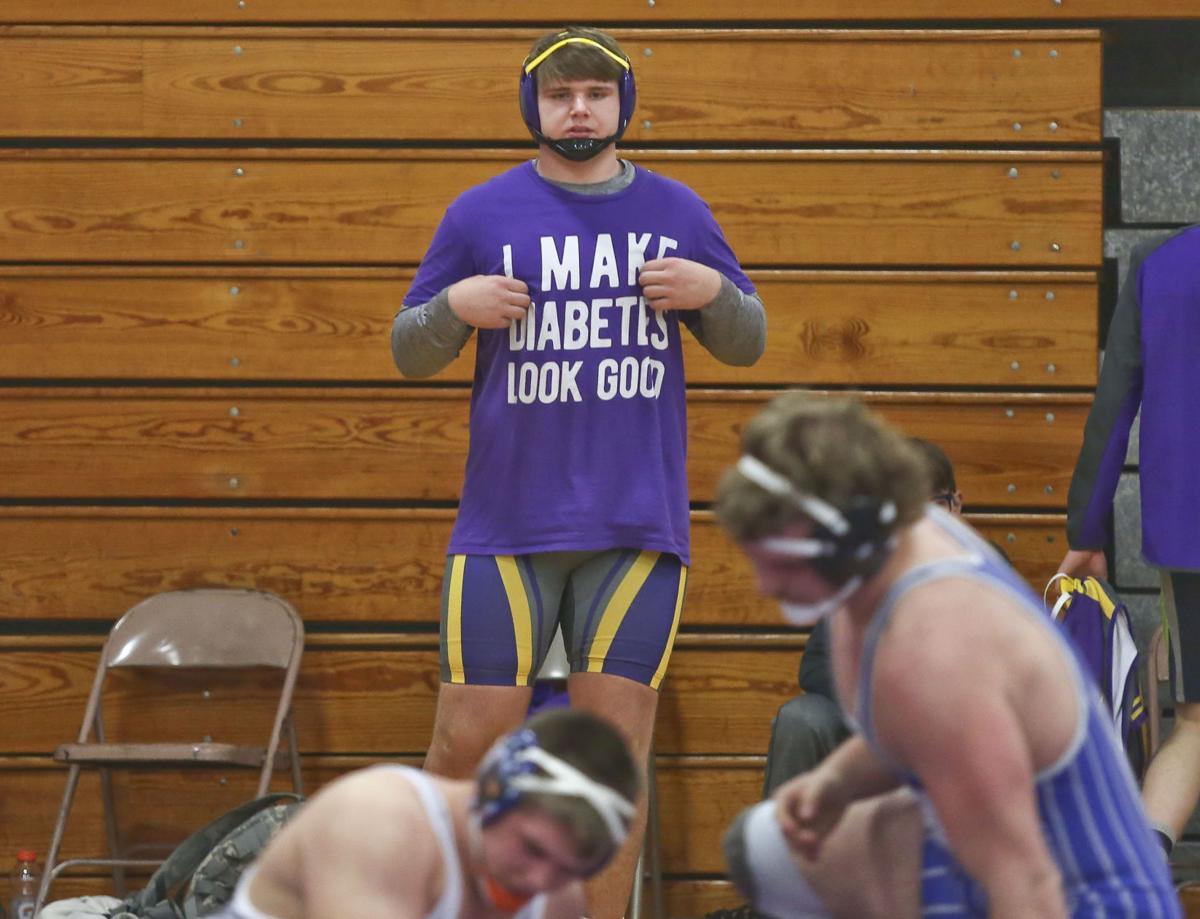 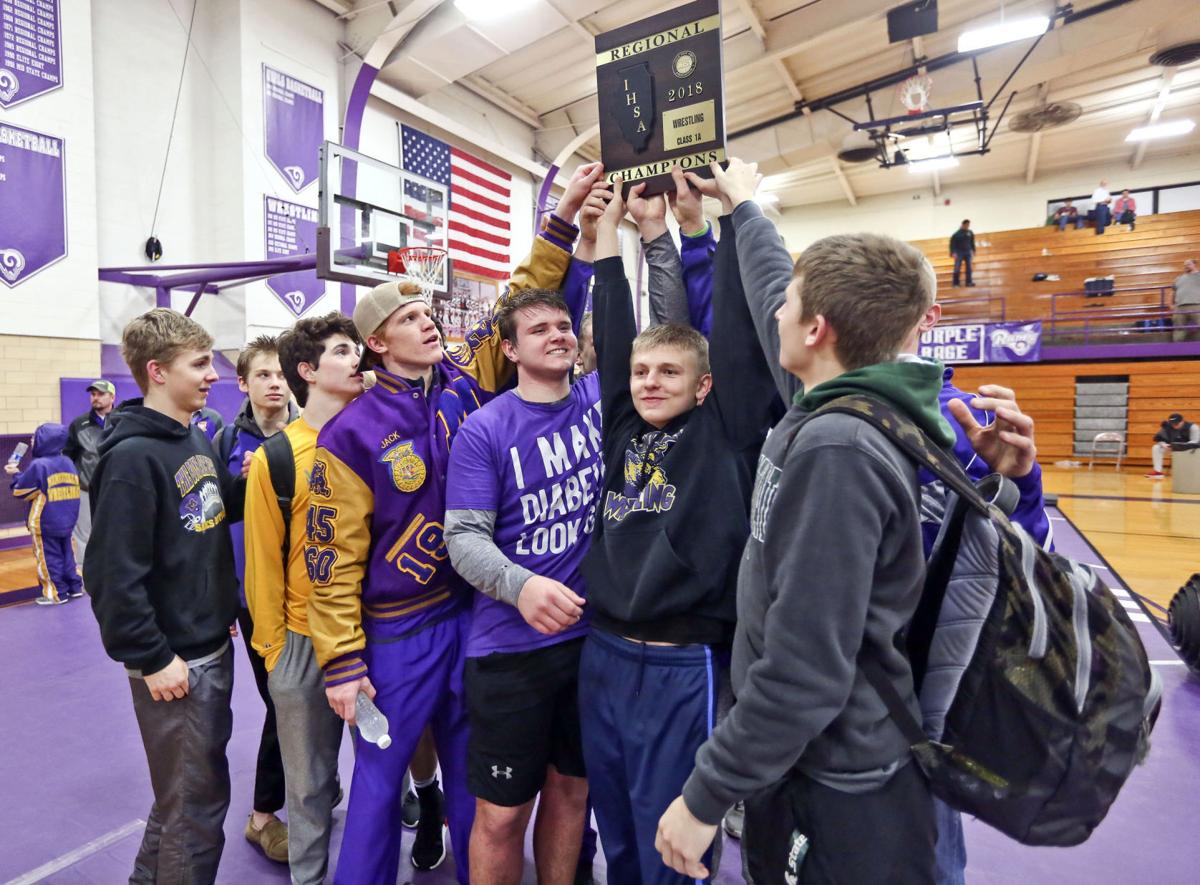 Monticello holds the Regional Championship trophy during the 1A Regional at Shelbyville. 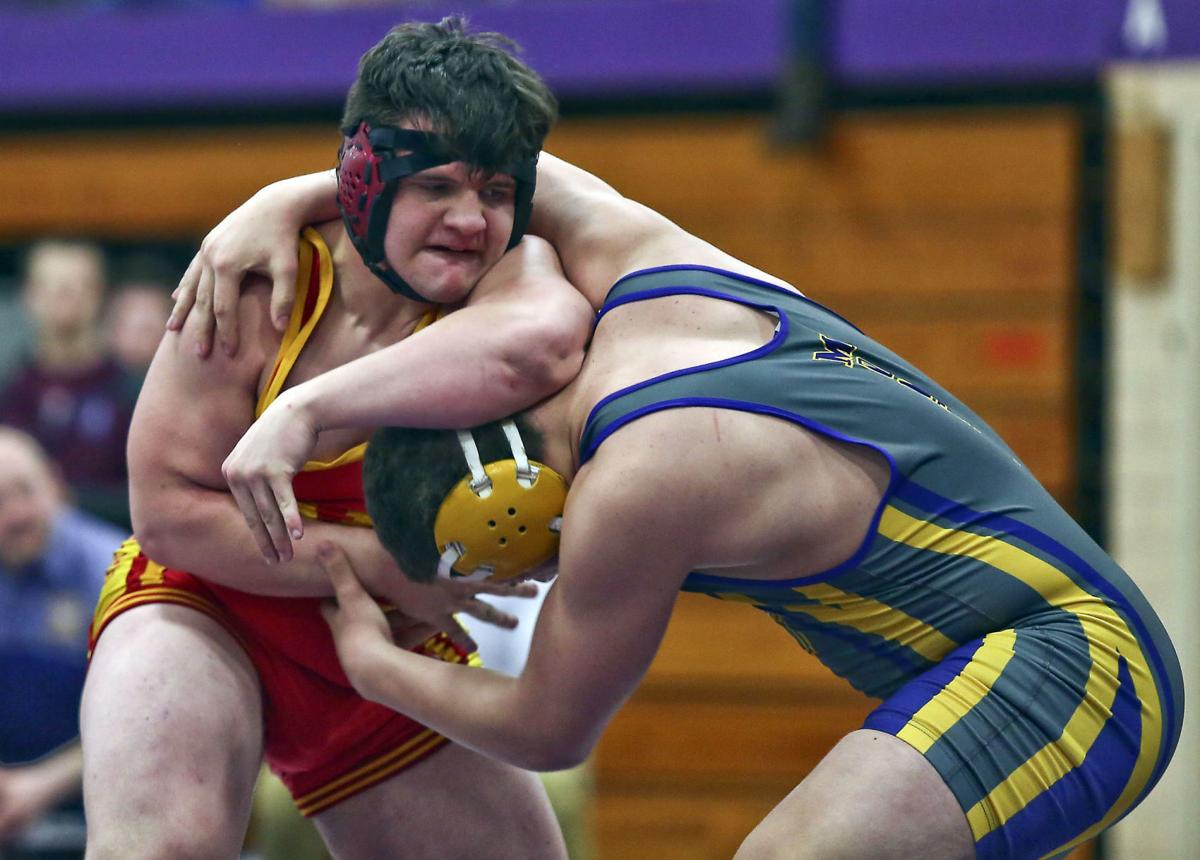 Warrensburg-Latham's Clayton Stock wrestles Monticello's Lonnie Jordan in the 220 pound division for third place during the 1A Regional at Shelbyville. 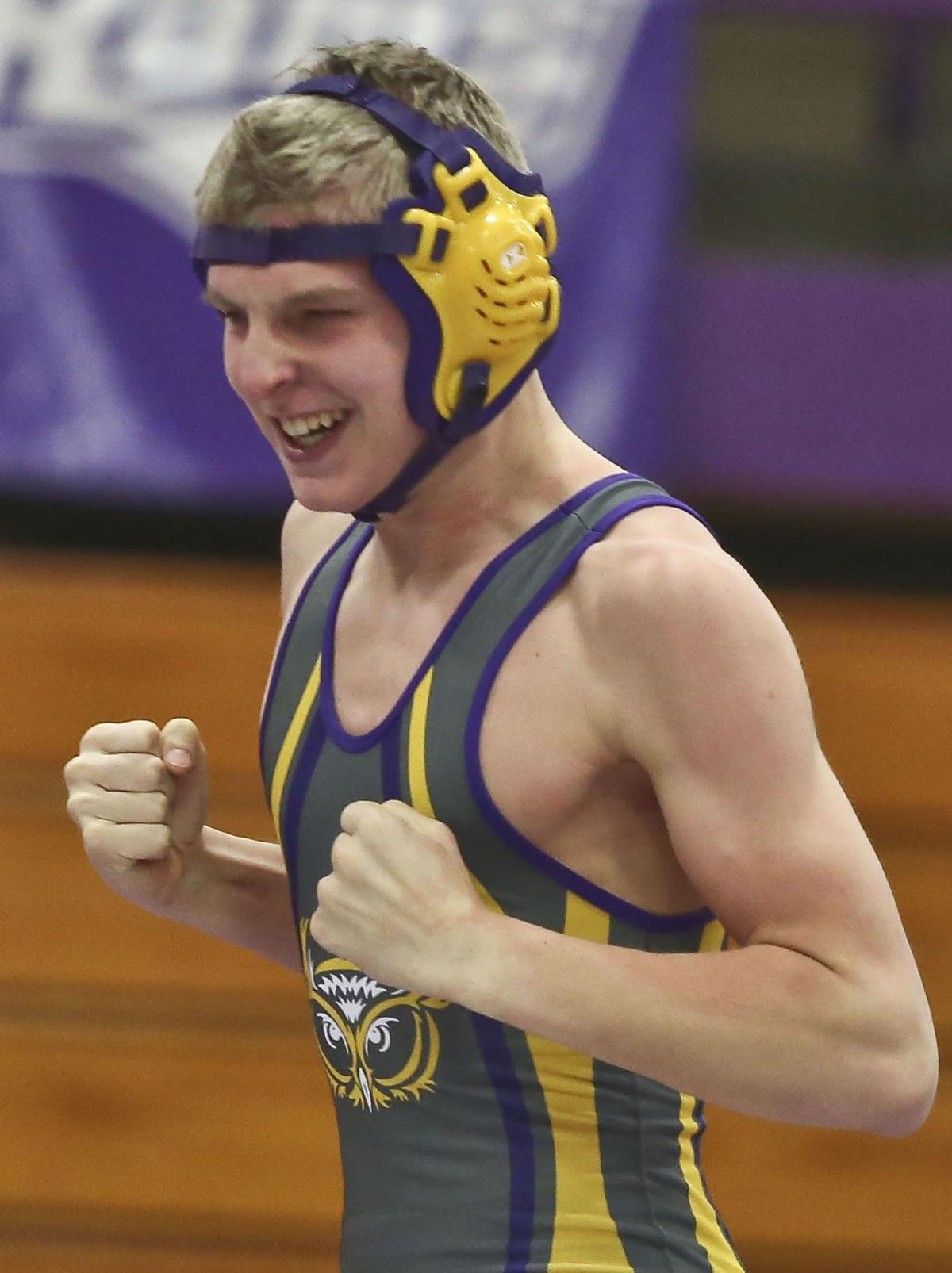 Monticello's Ethan O'Linc celebrates after winning the 120-pound division during the 1A Regional at Shelbyville. 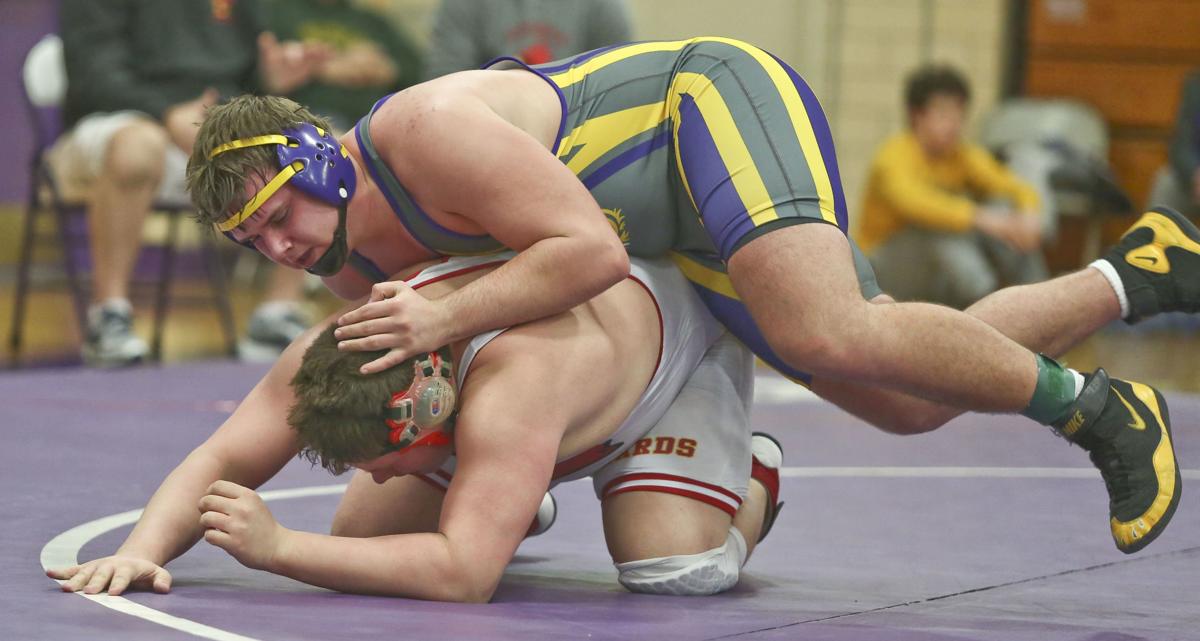 Monticello's Benton Freeseman wrestles Warrensburg-Latham's Adam Maxwell in the 285-pound division during the 1A Regional at Shelbyville. 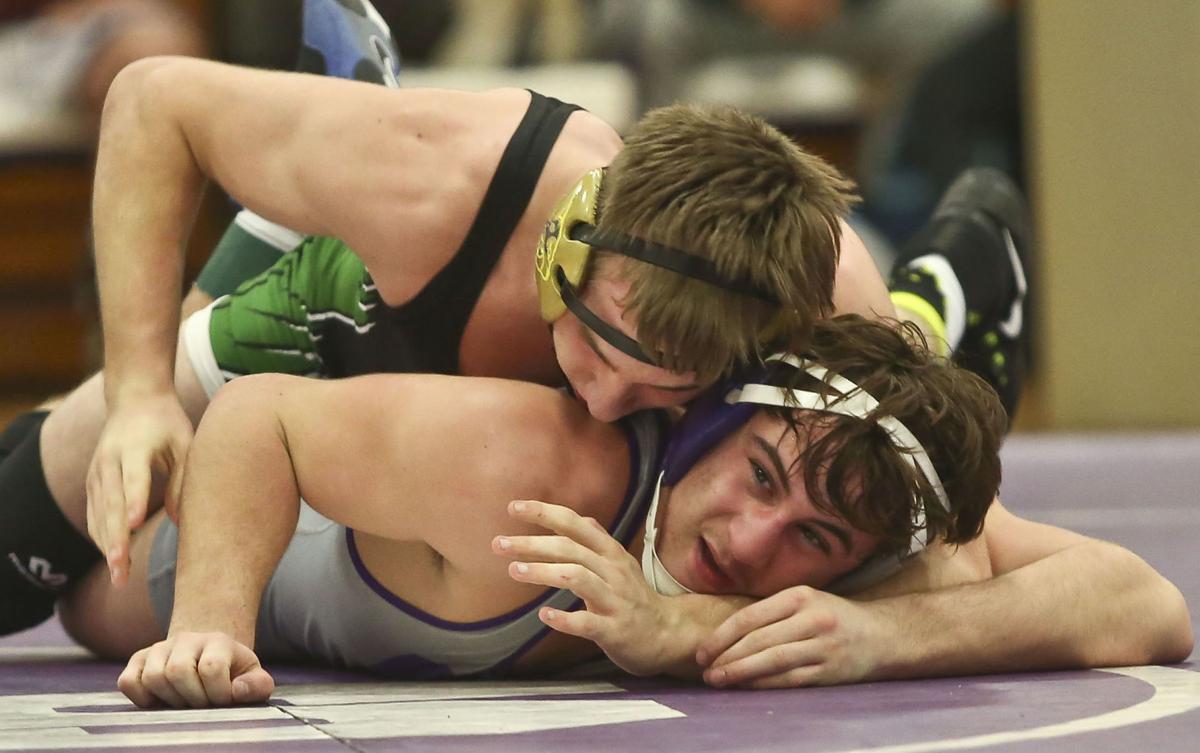 Shelbyville's Cade Helton, bottom, wrestles in the 152-pound division during the 1A Regional at Shelbyville.

SHELBYVILLE — Benton Freeseman doesn't hide behind anything. In fact, the Monticello wrestler stands in the spotlight to support his cause.

Just to the side of the mats at the wrestling Class 1A Shelbyville Regional on Saturday, Freeseman stood tall in a purple shirt with big block letters.

In December of 2016 Freeseman, a senior, was diagnosed with Type 1 Diabetes.

“I think it’s a little funny," Freeseman said of his shirt, which is one of many pro-diabetes shirts he owns. "A lot of people ask me if it’s real and I say, ‘Yeah, it’s not a joke,’ I think it’s funny and I think it’s cool."

Fourteen months later, when he hit the mat for the championship match of the 285-pound weight class, Freeseman (32-12) beat Warrensburg-Latham's Adam Maxwell to win the regional championship in the weight class and advance to next weekend's Class 1A Vandalia Sectional.

It capped off a dominating day for the Sages that saw 10 wrestlers and two alternates advance to next week's sectional while winning first place as a team, a commanding 55 points ahead of second-place Fithian Oakwood.

“He’s a leader on the football field, he’s a leader in the wrestling room and he’s a leader around the school," Monticello wrestling coach Andy Moore said. "He embraces that role that it’s something that he has and he didn’t choose to have it, but it is what it is. That’s his life now. He just spreads awareness to everybody else and lets everybody else know not to be ashamed of the cards their dealt."

It's been a long journey for Freeseman since his diagnosis.

He knew something wasn't right. He was urinating frequently, lacked energy and dropped 20 pounds between the football and wrestling seasons.

After deciding to go to the doctor, he got his diagnosis.

“My first thought was, ‘We’ll I’m not going to be able to eat and live a normal life like I normally would without being diagnosed,'" Freeseman said.

But after a little research, and more than a year of managing it, he admits his initial thoughts were overblown.

“I can do anything I could before," he added. "I wasn’t real familiar with the disease until I was educated about it."

After his diagnosis, he continued to wrestle in 10 dual meets before realizing he had a blood clot as a result of high blood sugar.

It shut down his season. In retrospect, that time off the mat paid off in a big way.

“Since I sat out and watched a lot of last year, I felt like I learned a lot just watching," Freeseman said. "I think that helped, just being able to watch and have a different perspective than I did prior to last season."

But that didn't stop him from being nervous when he got back on the mat this year. He had to adjust to the new set of cards he was dealt.

So far, it's gone off without a hitch.

“It was kind of hard at first to figure out when to eat, when to shoot or whatever and it’s my senior year. I was just nervous," Freeseman said.

Freeseman pricks his finger to test his blood pressure with pride and carries around a black lunch box with Insulin, test strips, emergency glucagon, juice and snacks in it.

When he and the Sages take the road, he's a walking advocate for diabetes.

“He’s kind of like a billboard down here," Moore said. "He’s in the spotlight when he’s warming up wearing it. I hope it makes those connections and lets people know not to be ashamed of it and they’re not different, that everybody has these differences about them and that’s fine. Embrace that and keep living your life the best way that you can."

Monticello will be well-represented at next week's Class 1A Vandalia Sectional.

“I don’t know what the record is for regionals, but I know that having 10 qualifiers and two alternates, that’s pretty good," Moore said.

“We had a couple guys step up, a couple guys who had matches that we just weren’t sure about and they went out and battled hard all day. It was a team effort."

For the better part of an hour, Warrensburg-Latham's Clayton Stock put his headphones on and did intense warmups waiting for his 220-pound third-place match.

"Stock was awesome," first-year Warrensburg-Latham coach Logan Jackson said. "He was warming up since 152 and he was at 220. He had his mind right and he was focused. I think that’s what won him that third place match was that he was focused.

“Every other person was talking, goofing around with their buddies, but not him. He had his headphones on, he was pacing back and forth and in his own head. That’s what won him that match was his focus level."

Stock was one of five Cardinals to advance out of regionals, and two others did as alternates. It was a goal Jackson and his team set at the beginning of the season.

“With Joey, we’ve been preaching to him all year that good things happen to those who work hard and nothing matters until the postseason."

Maxwell lost to Freeseman in the 285-pound finals to finish second and advance to sectionals. It was the third loss of the season for him against Freeseman.

Cade Helton and Luke Brown moved on to sectionals with second place finishes in the 152-pound and 120-pound classes, respectively.

“We’ll build with that," Shelbyville coach Greg Harkins said. "We’ve had many kids take second at regionals and still be state qualifiers. We told them, ‘This is the postseason, you survive today and it’s all about surviving everyday of the postseason.’

Helton is trying to qualify for state for the third consecutive season.

“We knew it was going to be a good match," Harkins said. "That kid’s pretty good. Unfortunately, we haven’t seen that kid much all year."

Clinton's Shobe looks to win state before joining the Army

A rare find in Decatur: Caleb Guise hopes to get back to state for Eisenhower

DECATUR — Cable Guise is a rare find in Decatur.

DECATUR -- The No. 18-ranked Millikin wrestling team split a pair of duals in the 'Wrestling at Kirkland' event held Thursday at Millikin's Ki…

MOUNT ZION — Kooper Loehr sat in the stands at the State Farm Center and watched wrestlers accept the medals that could have been his.

LINCOLN — Maybe it was the home-mat advantage.

Monticello wrestlers O'Linc and Dawson headed to state as sophomores

MONTICELLO -- Monticello wrestling coach Andy Moore is excited about his team's prospects for the future — and the present.

Monticello holds the Regional Championship trophy during the 1A Regional at Shelbyville.

Warrensburg-Latham's Clayton Stock wrestles Monticello's Lonnie Jordan in the 220 pound division for third place during the 1A Regional at Shelbyville.

Monticello's Ethan O'Linc celebrates after winning the 120-pound division during the 1A Regional at Shelbyville.

Monticello's Benton Freeseman wrestles Warrensburg-Latham's Adam Maxwell in the 285-pound division during the 1A Regional at Shelbyville.

Shelbyville's Cade Helton, bottom, wrestles in the 152-pound division during the 1A Regional at Shelbyville.