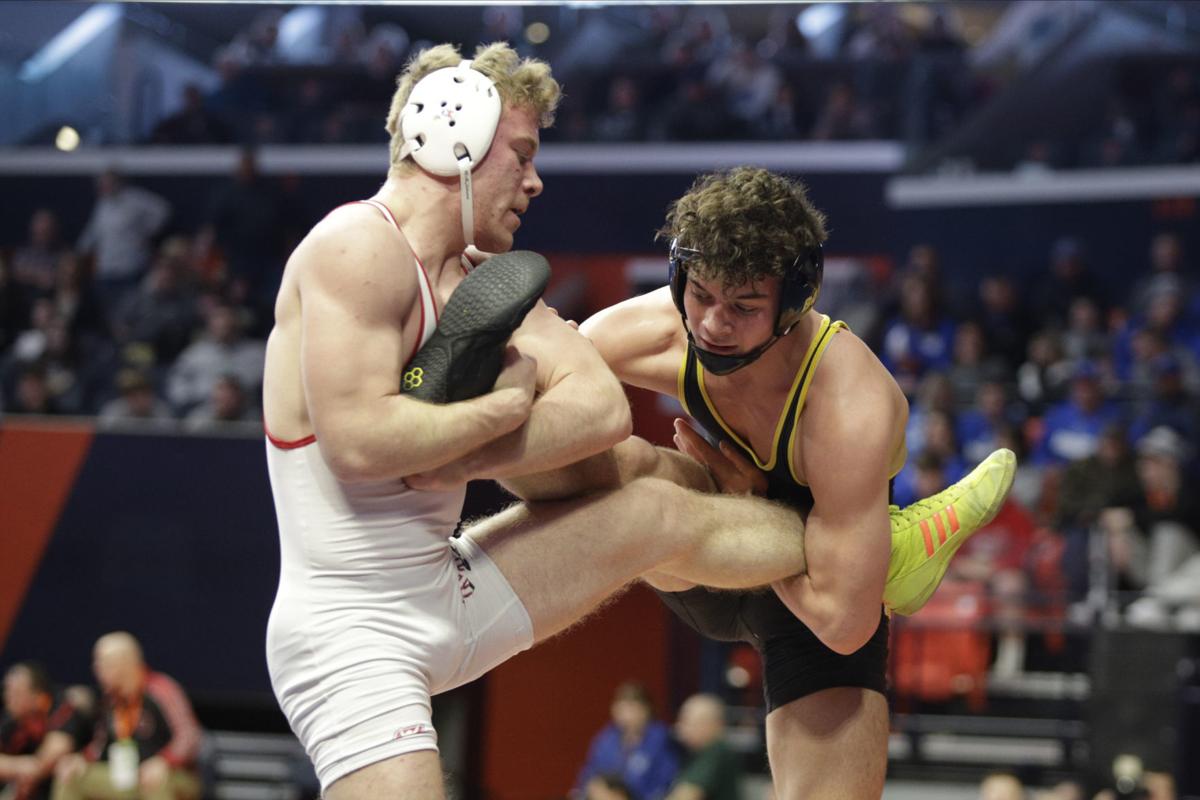 Mount Zion senior Lukas Eagle locks in a double-single leg hold during the third place match for the 152-pound weight class in Class 1A on Saturday in Champaign. Eagle went on to win the match 3-2 in the ultimate tiebreaker. 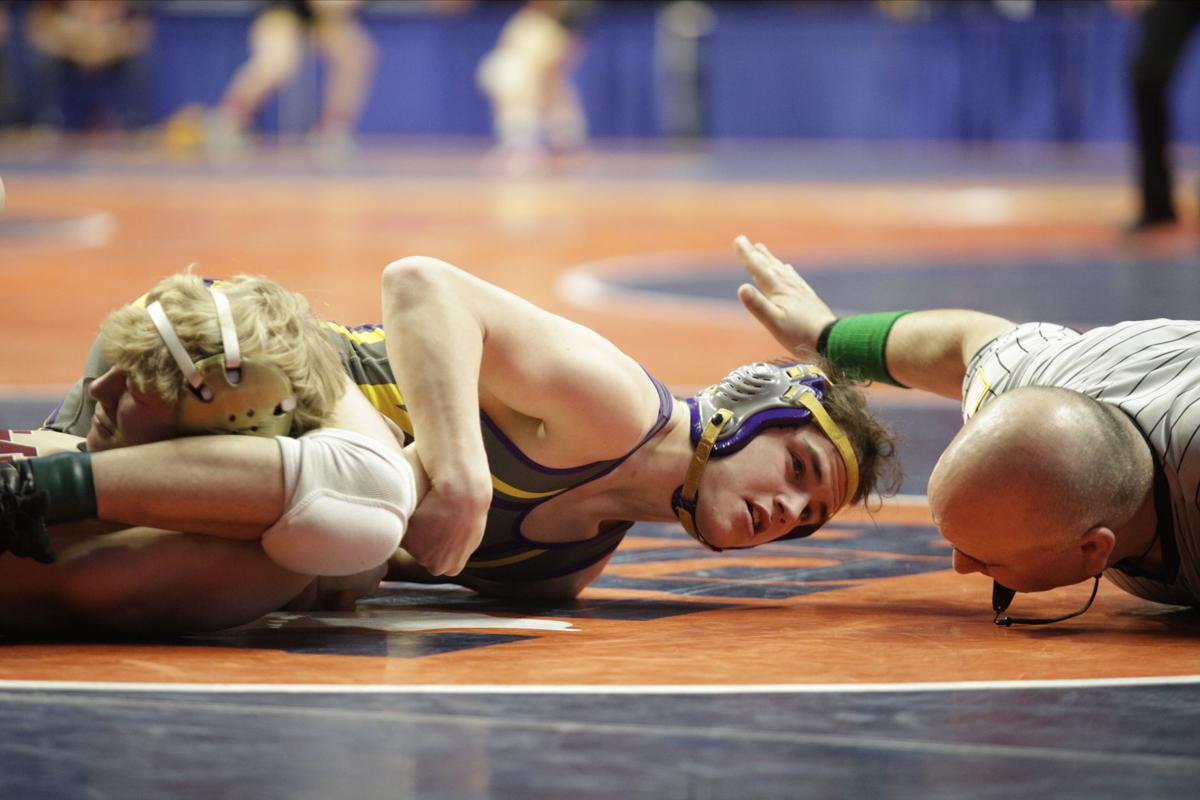 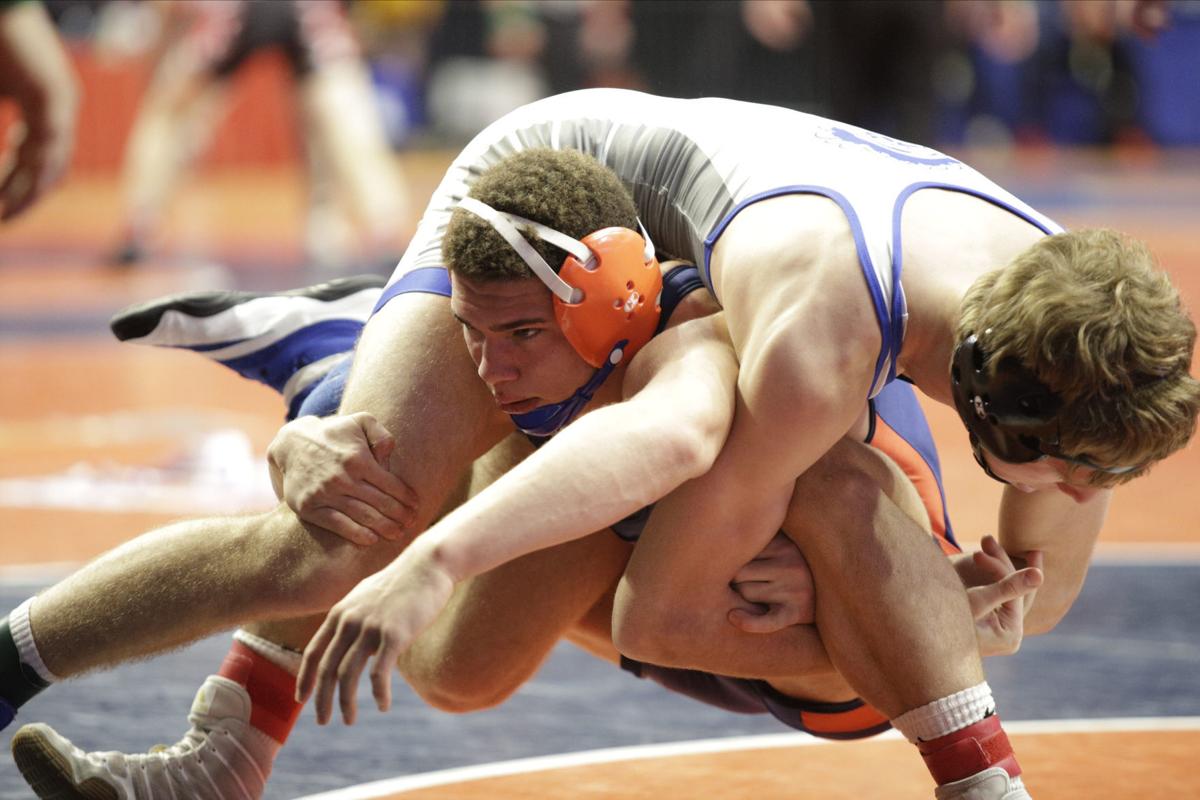 CHAMPAIGN — It was a moment that Mount Zion senior wrestler Lukas Eagle had never experienced before.

As Eagle battled Lena-Winslow's Jason Hermann for third place at 152 pounds during the Class 1A state tournament at the State Farm Center in Champaign, the two grapplers found themselves both with a standing leg lock on the other.

"I've never had that happen to me in a match before. That was pretty wild," Eagle said.

.@THEMTZBRAVES wrestler Lukas Eagle's 3rd-place match was one for the books. He and his opponent got into a double single-leg that many onlookers said they had never seen last so long before. Great photo by @jeffsmudde. pic.twitter.com/3HS9N8tVrm

It was a fitting moment for the match that brought two evenly-matched wrestlers together, but saw Eagle win in an ultimate tiebreaker.

The first period ended scoreless and Eagle took a 1-0 lead in the second period. Hermann tied it 1-1, where it remained through the end of regulation. Two overtime periods ended with the score 2-2 leading to an ultimate tiebreaker. Eagle, having scored the first points in the match, selected bottom and was able to get away from Herman to earn the 3-2 victory and a third-place finish.

"I knew it was going to be a tough match because I knew he has a great defense," Eagle said. "It just came out and I had more in my gas tank. I was fortunate enough to get the choice in the ultimate tiebreaker and I trusted my training to get out when I am on the bottom."

Eagle is cool and calm on the mat and the high intensity of the overtime match didn't faze him.

"It was business as usual today. I came in with a goal of a state championship. Ultimately I didn't reach the finals, but the next best thing is third and it feels good to go out in my career with a win," he said.

Mount Zion assistant wrestling coach Steve Owens was not surprised in how Eagle overcame the loss in Friday's championship quarterfinals.

"(Lukas) had to bounce back (Saturday) and it shows that he can jump back from anything. He's been a very good leader for us this year and I'm very proud of him," Owens said.

Eagle (41-2), a state wrestling champion in middle school, made his first trip to the state tournament this season and captured regional and sectional titles along the way.

"It's awesome that all my hard work paid off. The proof is in the pudding. If you can try hard and work to the best of your ability you can find success, and I feel like I can wrestle with anybody," he said. "I definitely knew I could wrestle on this stage to the best of my ability but to actually do it and for it to work out the way it did is great."

If you weren't paying close attention to Monticello wrestler Austin McConaha's fifth-place match against Dayton Hall of Mount Caramel, it could have been easily missed.

McConaha, a senior, pinned Hall in 21 seconds, setting a record for the fastest pin victory in Class 1A in state tournament history.

The victory was his 44th on the season, setting a new single-season record win total for the Sages' program.

🚨 Record Broken by @SagesWrestling senior, Austin McConaha in his FINAL HIGH SCHOOL match and earns 5th place in the IHSA Class 1A State Tournament at 132lb wt class! Austin has broken the school record for WINS in a season at 44 finishing his senior year at 44-13. #GoSages pic.twitter.com/94xRJqiaf4

"It was a great way to end the last match of my high school career. I don't know exactly what I did, but it worked," McConaha said. "I was expecting a hard six-minute match. I just came out today and went for it and it worked out."

McConaha was joined by teammate Ethan O'Linc on the medal stand as O'Lince finished in sixth place at 138 pounds.

Said McConaha: "It's awesome. We have been practice partners and in the same room for years. It's awesome to have the feeling of medalling together."

Argenta-Oreana senior Makail Stanley quickly fell behind 4-0 in his fifth-place match against Charlie Patterson of Auburn Saturday. But the senior was undaunted as he came back to take a 7-5 lead before pinning Peterson at 3:41.

"He's a great wrestler, just like everybody else here," Stanley said. "I knew the match was going to come down to who made the most mistakes and I felt like I made the most out of the mistakes that he made."

"Winning on the last note of my senior year is nice. I'm glad that I can show that Argenta is still a strong program," Stanley said. "I hope I can be an inspiration for the next generation of Argenta wrestlers to come out and try something."

Stanley has yet to finalize his next athletic endeavor at the collegiate level but wrestling holds a special place for the multi-sport standout.

Said Stanley: "Wrestling is my favorite sport, hand down, bar none. Every loss, every win has to do only with my efforts."

The Illinois Wrestling Coaches and Officials Association recently announced the members of the 2020 class of the Wrestling Hall of Fame that included Mount Zion graduate Brad Owens and Stephen Decatur High graduate Mark Malley. The 2020 class was honored on Friday in a ceremony at the State Farm Center.

Owens was a two-time Class 2A state champion — at 119 pounds in 1995-96 and 135 pounds in 1997-98 — and an overall state tournament four-time medalist. He went on to become a three-year varsity letter winner for the University of Wisconsin and owns the Advanced School of Wrestling in Madison.

"I haven't been back here to the state tournament in 21 years so it is cool to be back and see some old buddies that I used to wrestle with," Owens said.

The Owens family is still deeply ingrained with the Braves program as Owens' brother, Steve Owens, is an assistant coach and his nephew, Caden Owens, wrestled at 170 pounds and advanced to sectionals this season.

Malley was a two-time state champion at 145 pounds in his junior and senior year in 1967-68 and 1968-69 for Stephen Decatur. During that stretch, he had a 63-0 record for the Runnin' Reds and he went on to wrestle at Michigan State University. Malley was also selected as a part of the introductory class of the Decatur Public School Hall of Fame.

The class will be honored at a Hall of Fame Banquet on April 25.

The lessons wrestling gave to Owens have stayed with him through the decades.

"Wrestling gave me everything. It taught me a work ethic, it taught me how to set goals and how to keep a positive mental attitude and just how to be tough," Owens said. "That saying, 'once you wrestle, everything in life is easy' — it is the truth."

BLOOMINGTON -- Mattoon's wrestling team set new heights for the program this season and for Green Wave coach Brett Porter, the squad was somet…

Mount Zion senior Lukas Eagle locks in a double-single leg hold during the third place match for the 152-pound weight class in Class 1A on Saturday in Champaign. Eagle went on to win the match 3-2 in the ultimate tiebreaker.