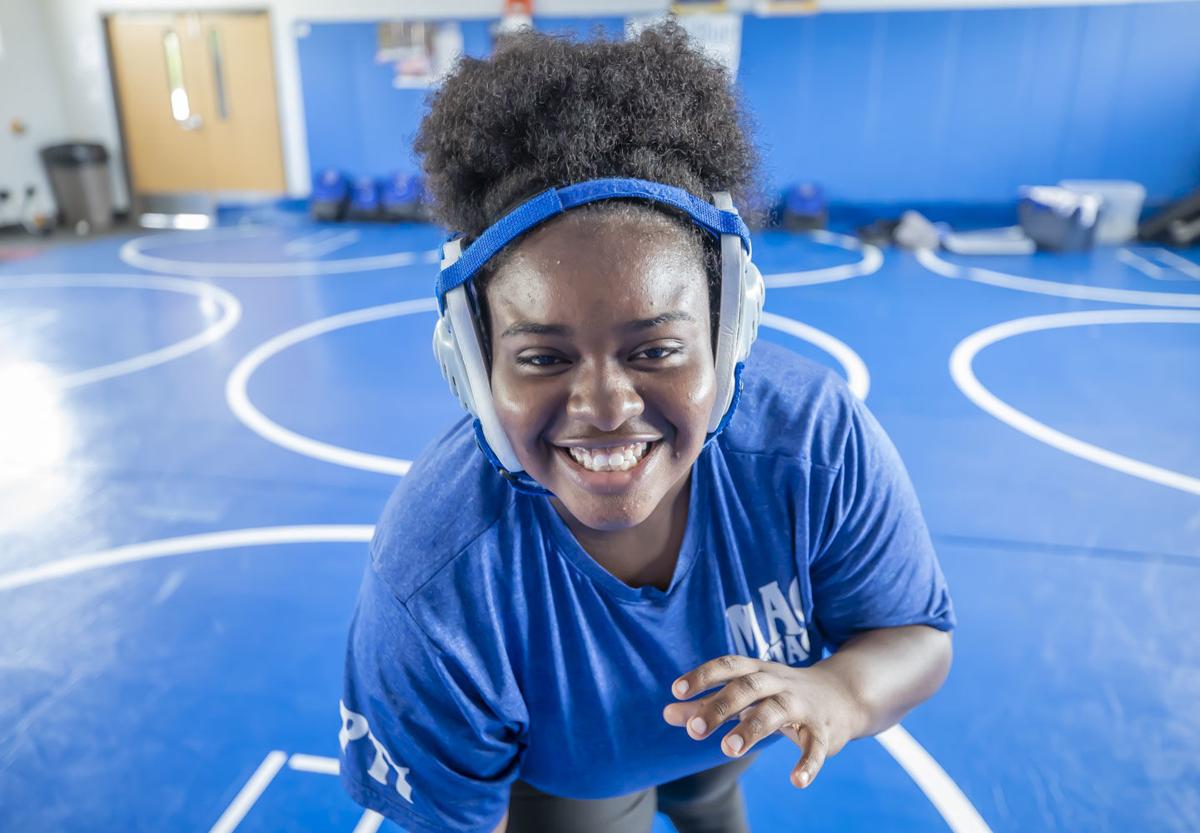 MacArthur junior wrestler Kamaria Emery hopes to be able to compete in the IHSA's first state wrestling tournament in the 2021-22 season. 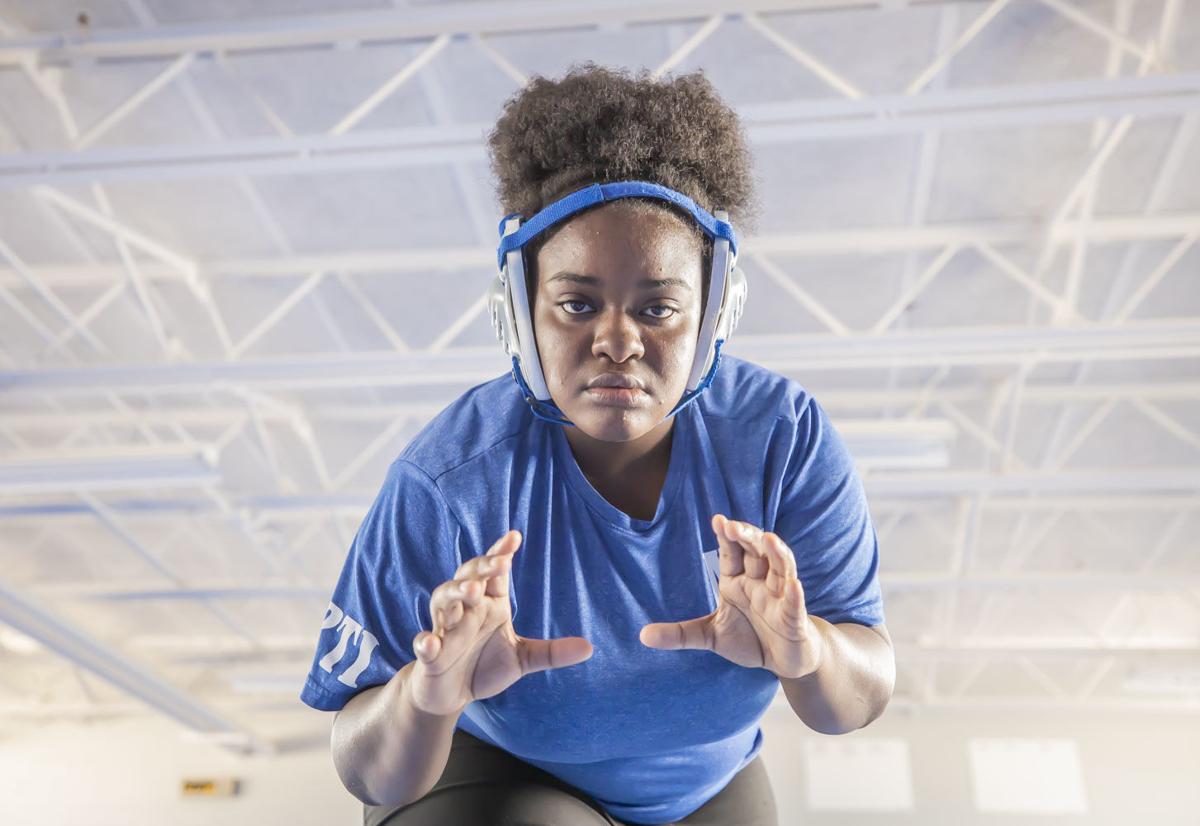 MacArthur wrestler Kamaria Emery is the only girl on the Generals wrestling team and picked up the sport in the sixth grade.

DECATUR — There are times that Kamaria Emery feels just like one of the boys and at other times she is the "kid sister" of MacArthur's wrestling team.

Emery, a junior, is the only girl on the Generals wrestling squad. It's a position that puts pressure on her to show that she's well trained and up to the challenge.

"No matter if you are a girl or not, wrestling is the toughest sport. I'm used to it now and wrestling boys is always going to be tough and you have to step up to the plate and know what to do," Emery said. "When you get on the mat, it is showtime and you have to prove to the boys you know what you are doing."

"(Adding an IHSA girls tournament) is very important. Allowing girls to compete head-to-head with other girls brings a lot of girls hope. Their shot of getting out of a sectional against the boys is pretty darn slim," MacArthur wrestling coach Alvin Jackson said. "There are also a lot of parents and girls who don't necessarily want to wrestle boys. They will still have to compete against boys during the season but knowing that they will have a tournament where they can compete against just girls helps."

As a sophomore, Emery wrestled at 220 pounds, making her the practice sparring partner of regional champion Carson Williams and sectional qualifier Ethan Badon. That's not an easy task and a lesser wrestler might have considered giving up.

"Kamaria's strength is her diligence and her work ethic. She keeps coming and goes into my wrestling room and the boys beat up on her," Jackson said. "She wrestles the biggest boys in the room. She was at 220 last year and we are going to get down to 195 next season. She comes in and goes against Ethan and Carson and occasionally surprises them.

Emery found wrestling in the sixth grade when Jackson demonstrated the spots at Hope Academy and she took part in his wrestling boot camps in middle school.

"At first, I wasn't really thinking about getting into it but as I got the sport I wanted to try it out and see if I was good or not. I was hoping I was going to be good and gave it a try. Ever since then I have really liked the sport and it is very fun," Emery said. "I think is is important to have a girls tournament. There are many girls that love this sport and they want to be able to compete too."

Emery fields a million questions when people discover she is a wrestler.

"I get reactions all the time and people think of me like I am the strongest girls at the school but it is not really like that. They just ask me a ton of questions. They say, 'Is that hard?' and 'How did you get on the wrestling team? I try to give them the truest answer I can give them," she said.

Emery said she loves the team aspect of wrestling and has earned the respect of the team.

"I like it when the team comes together (for duals) and we have to figure out how we are going to do this. Even though I'm the only girl on the team, I can still communicate with the boys and I've gotten to know what they are capable of," she said. "In some situations, I am treated like one of the guys and in some situations I feel like I'm maybe the little sister of the group but I'm stronger than half of the dudes on the team so I would say so I get treated very well."

Generals wrestling practices will get started in July with no immediate plans for wrestler-on-wrestler matches until regulations are determined by the IHSA and Illinois Department of Public Health.

"We will start with conditioning and have a boot camp where I will do three days of intense training and then we back off. I'm inspired by the girls program because I think it will get more girls to come out and be inspired by the new process," Jackson said. "It will be interesting to see how it plays out with the COVID-19 but we were set up for a tremendous recruiting class and getting kids interested. Overall, we had a really good season and had a sectional champion and multiple wrestlers at state. I'm excited and I hope things work out so that we will be able to compete."

Watch now: What is Illinois basketball getting in center Brandon Lieb? 'He's willing to work for it.'

After a rough Friday night basketball game, Brandon Lieb used to ask Deerfield boys basketball coach Dan McKendrick if he could get in the gym early on Saturday morning for extra work.

Members of the Herald & Review sports staff are counting down the top events they've covered. Justin Conn's No. 2 is Maroa-Forsyth at Tuscola in the 2014 Class 2A semifinals.

Hayden "Spike" Harvey got into a go-kart when he was 6 and has been racing since. Read more in the latest Macon Speedway Driver Spotlight.

It's early, but the track points races are already heating up.

Molly Day isn't sure is she's a trailblazer, but she hopes she can be an inspiration for future female drivers.

Brandon Lieb, a 7-footer from Deerfield High School verbally committed to Illinois after getting late offers from schools such as the Illini, Oklahoma State and DePaul, Oklahoma and Utah.

Members of the Herald & Review sports staff are counting down the top events they've covered. Justin Conn's No. 3 is St. Teresa vs. Meridian for the Okaw Valley Conference title in 2010.

Flaten: Collecting fuels love of baseball even when the game hasn't earned it

The COVID-19 pandemic has made us all "preppers" now.

Monahan: IHSA made the right call in moving state boys basketball tournament back to Champaign

I was on vacation when the Illinois High School Association voted on moving the boys high school basketball state tournament from Peoria back to Champaign after 25 years. When I heard the news, I was elated.

In nearly three decades in the field of strength and conditioning coaching, Lou Hernandez has seen it all — almost.

Six dogs were rescued from a Decatur house that caught fire Saturday.

MacArthur junior wrestler Kamaria Emery hopes to be able to compete in the IHSA's first state wrestling tournament in the 2021-22 season.

MacArthur wrestler Kamaria Emery is the only girl on the Generals wrestling team and picked up the sport in the sixth grade.