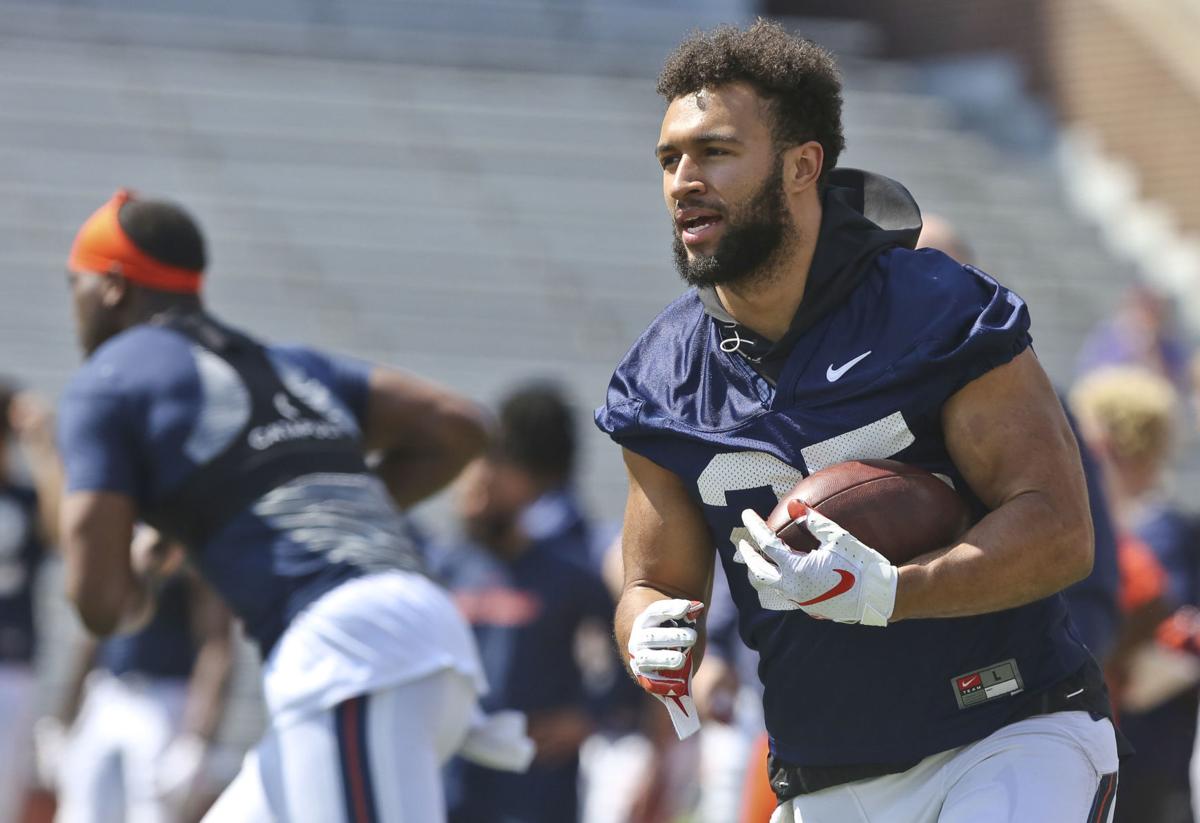 Running back Dre Brown joined the Illinois football team in January of 2015 and is considered the 'old man' on the team, but he's got plenty left in the tank. 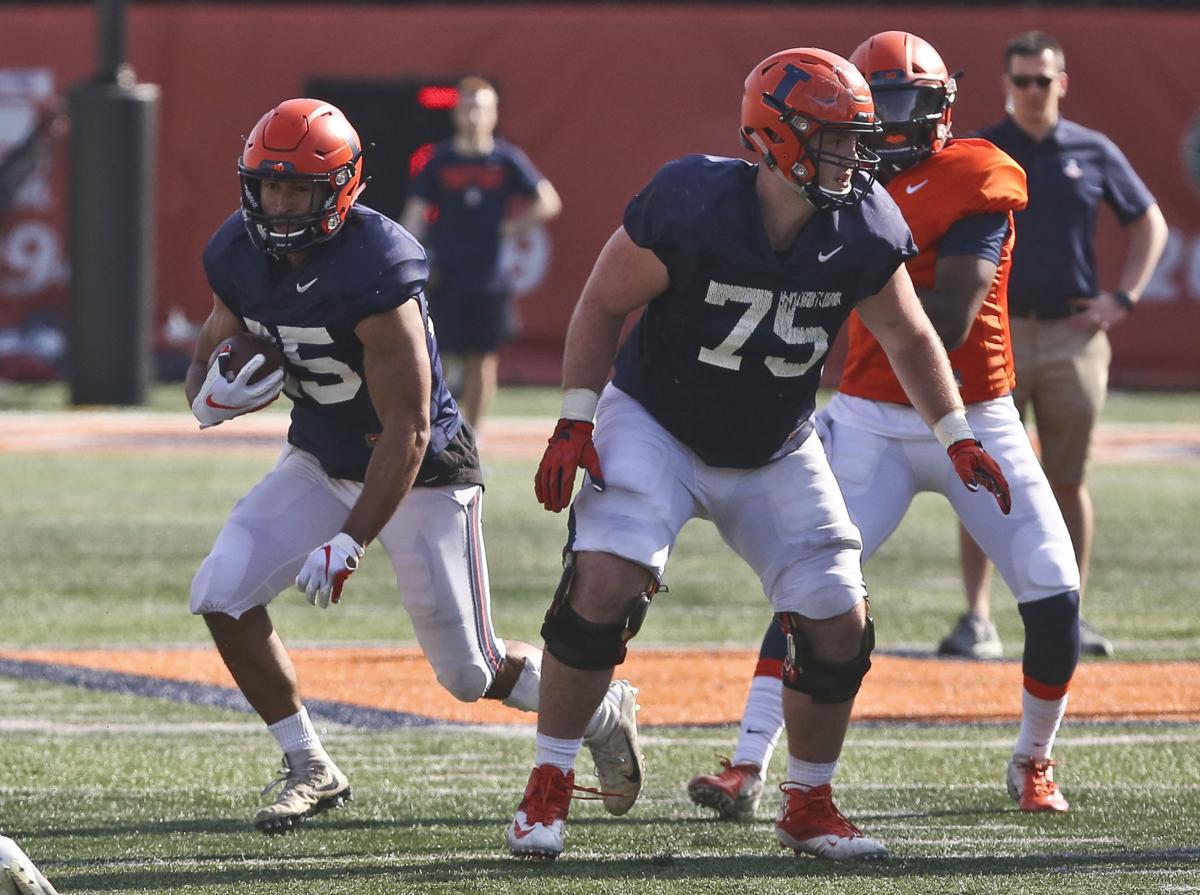 URBANA — On Sunday evening the Illinois football Twitter account posted a video of a long touchdown run by Dre Brown with the caption: "Old man Brown can still scoot."

It wasn't a knock on Brown; it's just that, well, Brown is kind of old — at least compared to most of the rest of the team. He's been in Champaign since January of 2015, enrolling early as a four-star recruit out of DeKalb High School.

“Which is crazy, because it’s 2019," Brown said with a laugh. "I think it’s funny. I’ve been here for a while. I’ve been through three coaching staffs, three playbooks. Yeah, I guess people perpetually come to me for wisdom and what not. It’s fun to go along with it."

Running backs coach Mike Bellamy recruited Brown out of high school during Bellamy's first coaching tenure with the program, and Bellamy also played for Illinois in the 1988 and 1989 seasons. Brown wasn't even alive when Bellamy threw on his Illinois jersey, but ... “I keep on telling people that me and Dre played together," Bellamy said.

The rest of Brown's story has been well-told: Back-to-back torn ACLs, four surgeries, two completely lost seasons and two abridged seasons. He missed the first three games of last year with a toe injury, but he's ended the last two seasons healthy. Offensive coordinator Rod Smith said Brown may have had the best training camp of all the running backs a year ago. This year, Brown is healthy and has plenty of juice left in his legs to contribute this season.

All things considered, being the "old man" on the team beats being the guy who is always hurt.

“Those are the reasons you coach college football, to see a kid like that go through everything he went through, then to see him after the spring game and spring practice cry because he finally made it through spring," Bellamy said. "Then seeing a guy today who knows he has a role, he knows his role is going to be important and to see him successful day by day. He’s humble enough to understand that it can be taken away like that, but he’s focused enough to know that he has to contribute to be successful."

Looking back now, with 318 rushing yards and two touchdowns in his pocket, Brown isn't entirely sure how he made it through some of those long, injured days. He missed three training camps with injury.

“I remember sitting here for three straight years just watching camp," said Brown, who was born in Decatur. "These last two years I’ve been participating. I’ve seen the worst of it and I’ve seen the best of it. It’s all part of my testimony."

When Rod Smith arrived last offseason, some questioned if Brown would stick with the program. It had been a physically and emotionally trying tenure, and one that hadn't been statistically fruitful. Brown, though, was steadfast about staying around.

“To me, that’s what football is all about is guys like Dre Brown who have to persevere through injuries and hard times, who have been at the highest in high school, and all of a sudden you’re probably at your lowest," Smith said. "I’m sure there were times Dre was thinking about, ‘This ain’t for me.’"

Brown did stick through it and now provides both production on the field and a reassuring voice off the field. He used to look to former Illinois running back and current Houston Texans running back Josh Ferguson for advice. Ferguson was bound for the NFL and showed younger backs like Brown and Reggie Corbin how to be college athletes.

All these years later, Brown is dishing out advice to younger players. Some of the freshmen ask Brown what it's like to be married — he got married last offseason — or Brown tells them how to take care of their body and how to learn the playbook. If Smith or the coaching staff is particularly hard on a player during a practice, Brown can talk them back down. He sees the bigger picture that may have been harder to see a few years ago. If the injury bug bites, Brown knows how to navigate those waters and doesn't hesitate to walk a player through it.

In this case, being an "old man" pays off.

WAGNER: Establishing a quarterback key to getting Illini football out of the blocks 🏈

Last month, Illinois Athletic Director Josh Whitman sat at a long, oval table surrounded by assorted media and talked about the school year that was.

Illinois football senses a turn in the tide

CHICAGO — In 2017, Lovie Smith and Co. stripped their current home to the studs in order to get to the land they wanted to build their new hou…

CHICAGO — Lovie Smith was finally able to talk about Brandon Peters, who will be right in the middle of the battle for Illinois' starting quar…

TUPPER: Inside the Illini's quarterback battle and Lovie Smith's plan for defense 🏈

Re-invented Nate Hobbs learned from his mistakes for Illinois football

Illinois football banking on a better defense this season

CHAMPAIGN — The defensive statistics were gaudy, in every way a team doesn't want them to be.

CHAMPAIGN — The grass fields at the Campus Rec Fields are prepped and the Illinois football team is set to begin training camp at 10 a.m. on Friday.

CHAMPAIGN — The pocket collapsed and Brandon Peters saw a way out. He bolted to the right side and down the sideline for a first down.

URBANA — Most conversations with Illinois football coach Lovie Smith come back to the same word: Takeaways.

No looking back: Illinois running back Mike Epstein has his eyes on the future

URBANA — Mike Epstein feels the hands of a defender hit him during practice, but it doesn't appear he cares.

CHAMPAIGN — In seventh grade, Isaiah Williams grabbed the wheel of his JFL team, moved to quarterback and lead the team to the league Super Bowl.

Marquez Beason learning the defense for Illinois football, with help from Nate Hobbs

URBANA — Assigning Nate Hobbs and Marquez Beason to be roommates during Illinois football training camp was a deliberate act.

'I was praying every night for a breakthrough,' Illinois receiver Edwin Carter cleared to play

URBANA — No one in the north end zone of Memorial Stadium really knew what happened after Edwin Carter's second touchdown catch last season.

Here's what we learned from Illinois football training camp

After two weeks of Illinois football training camp that was open to both fans and the media, here's what we've learned ahead of the Aug. 31 season opener at home against Akron.

How the Illinois football team got introduced to its new $79.2 million practice facility

URBANA — Most players on the Illinois football team weren't entirely sure what they were in for on Sunday.

Running back Dre Brown joined the Illinois football team in January of 2015 and is considered the 'old man' on the team, but he's got plenty left in the tank.