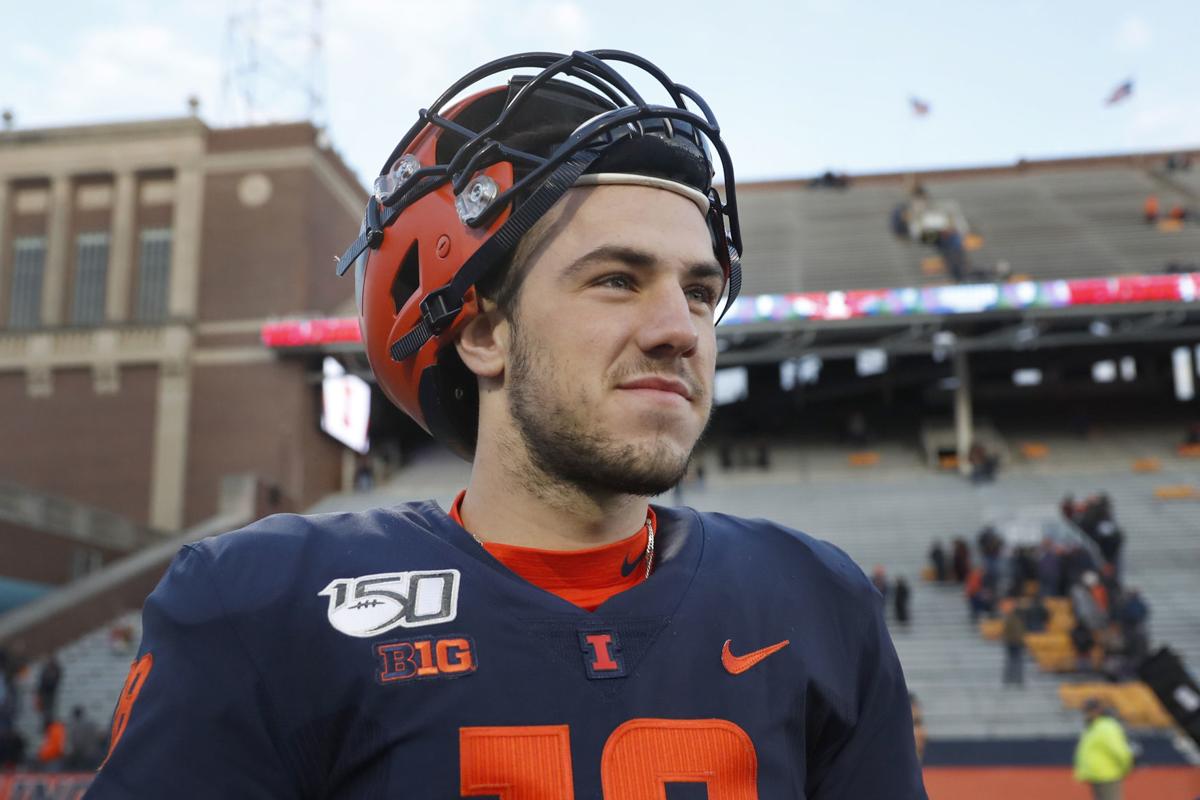 Illinois quarterback Brandon Peters has a calm demeanor about him on the football field. 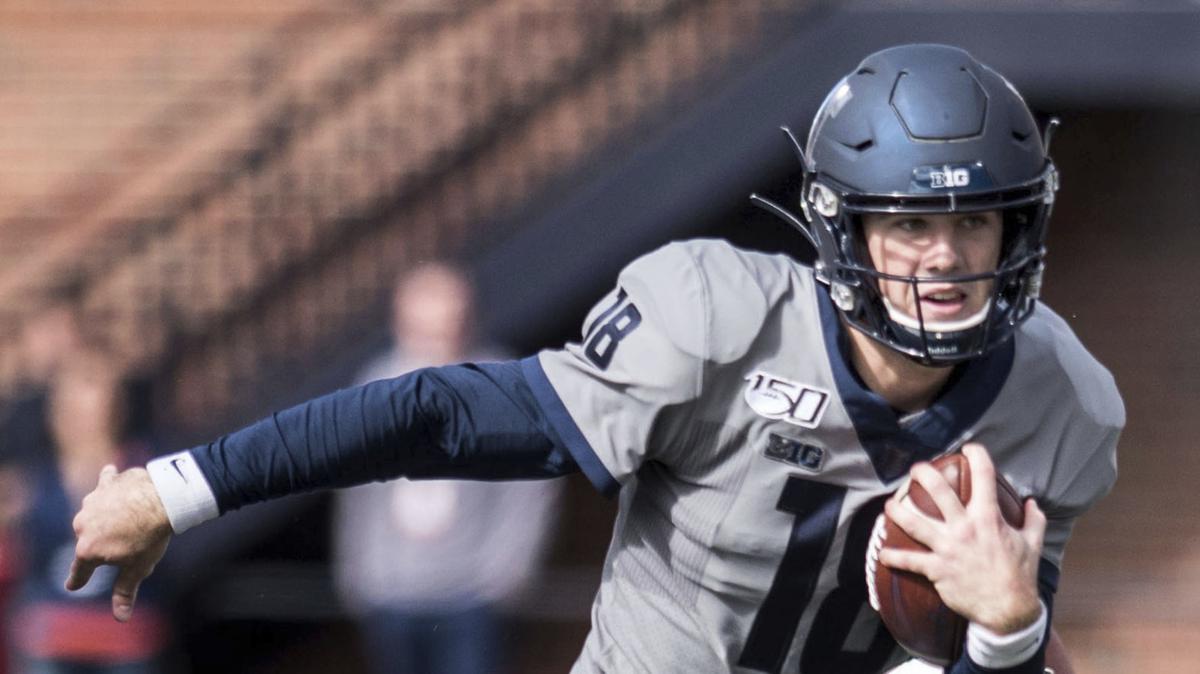 Illinois quarterback Brandon Peters has been cleared from concussion protocol and ready to go in Monday's Redbox Bowl against California.

CHAMPAIGN — Some football games come with an undeniable amount of electricity, so much that it can threaten to rattle even the most level-headed players. At least, that was the case four years ago when Avon High School in Indiana hosted Brownsburg High School.

The two schools are bitter rivals and ESPNU televised the Sept. 11, 2015 game nationally. Avon had quarterback Brandon Peters, the No. 1 prospect in the state of Indiana in the 2016 class who committed to Michigan and later joined Illinois as a graduate transfer. Brownsburg had Hunter Johnson, the quarterback who was the No. 1 player in Indiana in the Class of 2017 who later committed to Clemson and has since transferred to Northwestern.

Everybody on his sideline had a bit more energy to play Brownsburg, particularly on national television," Avon head coach Mark Bless recalls. Well, almost everybody.

"A lot of his teammates liked the limelight and being on ESPN and the status that game brought against a rival school, and Brandon just played it like it was another game," Bless told the Herald & Review.

Peters has a way of shutting down everything around him during a game, and did that against Brownsburg. He completed 21-of-28 passes for 362 yards, six touchdowns and no interceptions to lead Avon to a convincing win.

The game was a microcosm of Peters' personality. He's unflappable in nearly any situation. Brownsburg couldn't rattle Peters and neither could Michigan State two weeks ago when Peters and the Illinois offense entered the fourth quarter trailing by 21 points with a bowl berth on the line. Peters delivered two touchdowns to spearhead the come-from-behind win and carried himself like unbreakable glass in the fourth quarter.

“I don’t know, man, it just happens," Peters said. "It’s just my personality, I guess. Honestly, I don’t care what’s going on around me. I’m just so focused. I guess that kind of helps out a little bit. That’s how I’m wired."

Whatever he's doing is working for his teammates. They fed off of it when he was a three-year starter at Avon and feed off of it now in his first of two seasons of remaining eligibility in Champaign.

“You can’t let the highs and lows get to you as a quarterback because it’s only going to affect the guys around you," Peters said. "Being in the position you are as a quarterback, you need to have that trait because the guys are going to feel your presence, feel your mood or whatever is going on. To be able to handle mistakes, if you make a turnover, a lot of it is on your shoulders to stay calm and keep everyone around you calm."

Said Bless: “I think everybody had confidence in him. I think that's one of the things he emits is confidence that he can get the job done and that everybody else can too. ... Most football players have some spark and intensity on the sidelines, and then there was Brandon."

In those moments, when Illinois is trailing and needs to lean on its passing game to come back, Peters doesn't waver. In turn, neither does the rest of the offense.

“I feel like the quarterback really sets the tone of the offense," receiver Josh Imatorbhebhe said. "If he’s calm, everybody else is calm. If he’s kind of freakin’ out and yellin’ at people, then everybody else is starting to yell at each other.

"He’s the one who sets the attitude for the offense. When the going got tough, it didn’t affect Brandon. He was even-keeled. That definitely helps us perform under pressure and it helped us to win against Michigan State last weekend."

Even when Peters threw an interception on a play in the end zone that would have tied the game late in the fourth quarter against the Spartans, he didn't break and came back two possessions later for the game-winning touchdown pass to tight end Daniel Barker.

“It is his personality," head coach Lovie Smith said after the game. "There’s so much emotion in the game. Certain positions can’t get too high or too low. You guys know Brandon, that’s who he is. You need to quarterback to be even-keeled and to know it’s about the next play."

There is, however, a competitive fire inside of Peters, one he lets out only after carefully picking and choosing his spots to let everyone see. After finding Barker in the end zone, he threw both arms up in the air to celebrate. It was only natural after engineering the game-winning drive to snap a bowl drought that dated back to 2014.

"He's not a robot," Imatorbhebhe said.

But running back Reggie Corbin hears everything Peters says on the field, and can feel the fire burning from his quarterback next to him, even if no one else sees it.

“That’s the first time anyone saw that, but he’s like that all the time, it’s just secretive," Corbin said. "When you’re next to him, you hear everything he says. It’s not what everyone thinks, but he is definitely the most even-keeled quarterback I have ever been around. He doesn’t really show emotion unless he really wants you to know.

“I think it’s great because you know that you’ve got a guy who is going to go out there and be the same every single day. You know what you’re going to get."

Bless had seen that kind of expression before, even if it wasn't often. Peters and Avon played Cathedral in a 2015 regional championship game and Peters delivered a back-shoulder pass from Peters in double overtime to keep their season alive. Yeah, Peters showed some emotion after that one.

Every now and again Peters lets out the competitive drive that fuels him, giving a brief glimpse into his passion for the game. Mostly, he's unbreakable in nearly every situation.

“He has always been like that," Bless said. "From the first time I met him back when he was in middle school, just kind of a laid back guy. I’ve made a statement before with Brandon, he was always that mentality or mindset, but on the field he’s a fierce competitor. Usually those two don’t mix, but for him it does."

TUPPER: 'The Hug,' a victory in East Lansing and suddenly a bowl game in the Illini future. How it all happened.

“The Hug” may have been spontaneous, but it was 44 months in the making.

There likely won't be any official status on Illinois quarterback Brandon Peters until just before kickoff on Saturday in the season finale against Northwestern. Illinois head coach Lovie Smith keeps the injury report close to the vest.

What to watch for when Illinois football hosts Northwestern

CHAMPAIGN — If the Illinois football team began to feel the tide shifting in last season's loss to Northwestern, it has a chance to ride the w…

Illinois could stop a Northwestern offense that ranks second-to-last in the Big Ten in total yards and scoring and couldn't get its own offense going on Saturday in a 29-10 loss at Memorial Stadium.

CHAMPAIGN — Illinois had a chance to finally beat its rival for the first time for any single one of the players on the roster, and particular…

How a bowl game helps Illinois football on the recruiting front

It was a big recruiting weekend for Illinois head football coach Lovie Smith and Co., and it was fruitful.

Illinois running back Dre Brown not pursuing sixth year, Redbox Bowl will be final game as an Illini

Brown decided he would not pursue a sixth year of eligibility. His Illinois career will end on Dec. 30 after the Redbox Bowl against California.

The early signing period for football runs from Wednesday to Friday, when players can sign their National Letters of Intent.

Illinois beat writer Joey Wagner is with the team as they prepare for the Redbox Bowl in California.

Illinois quarterback Brandon Peters has a calm demeanor about him on the football field.

Illinois quarterback Brandon Peters has been cleared from concussion protocol and ready to go in Monday's Redbox Bowl against California.