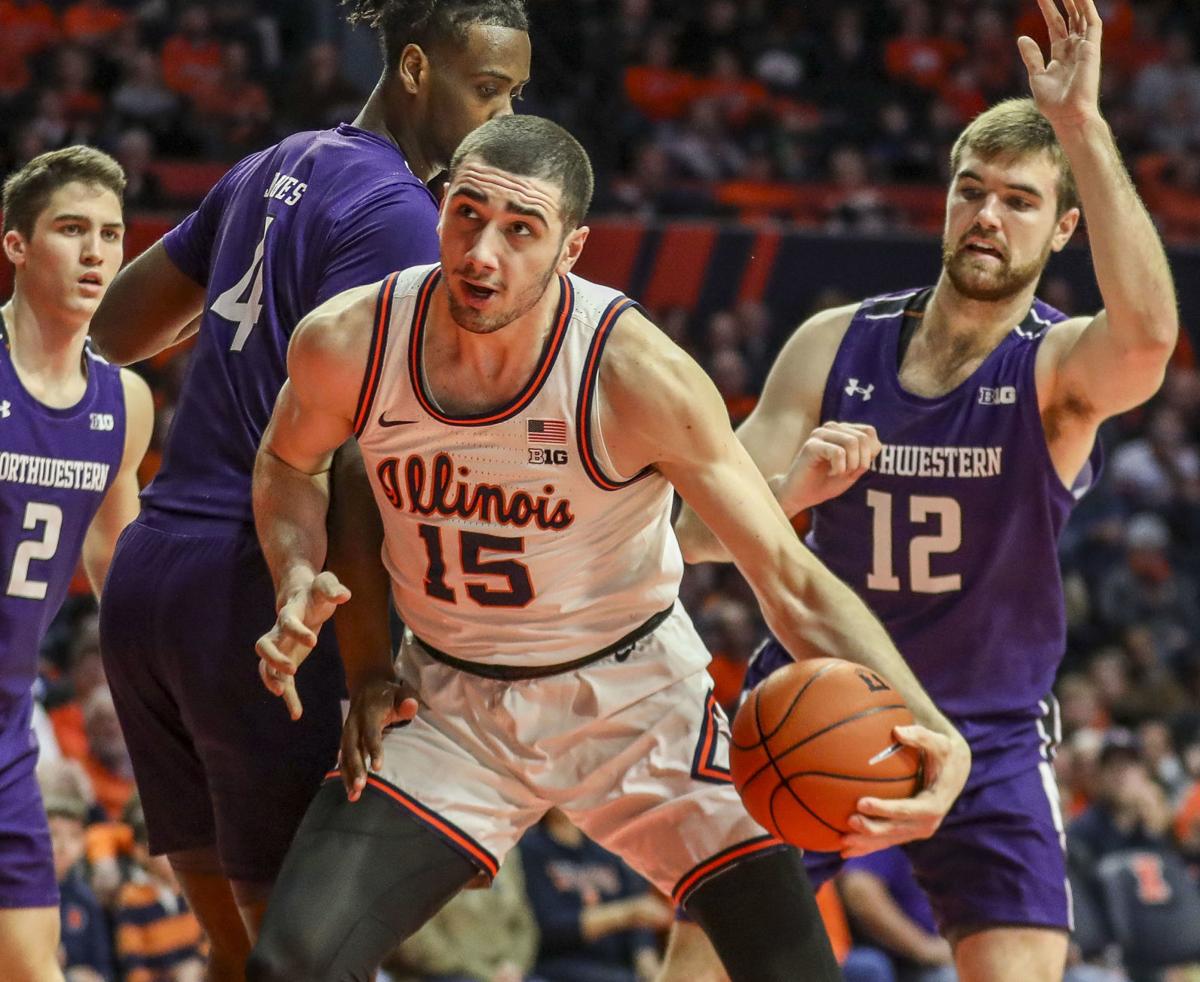 Illinois forward Giorgi Bezhanishvili (15) has been good in the post in his college career, but his 3-point shot can open doors for the offense. 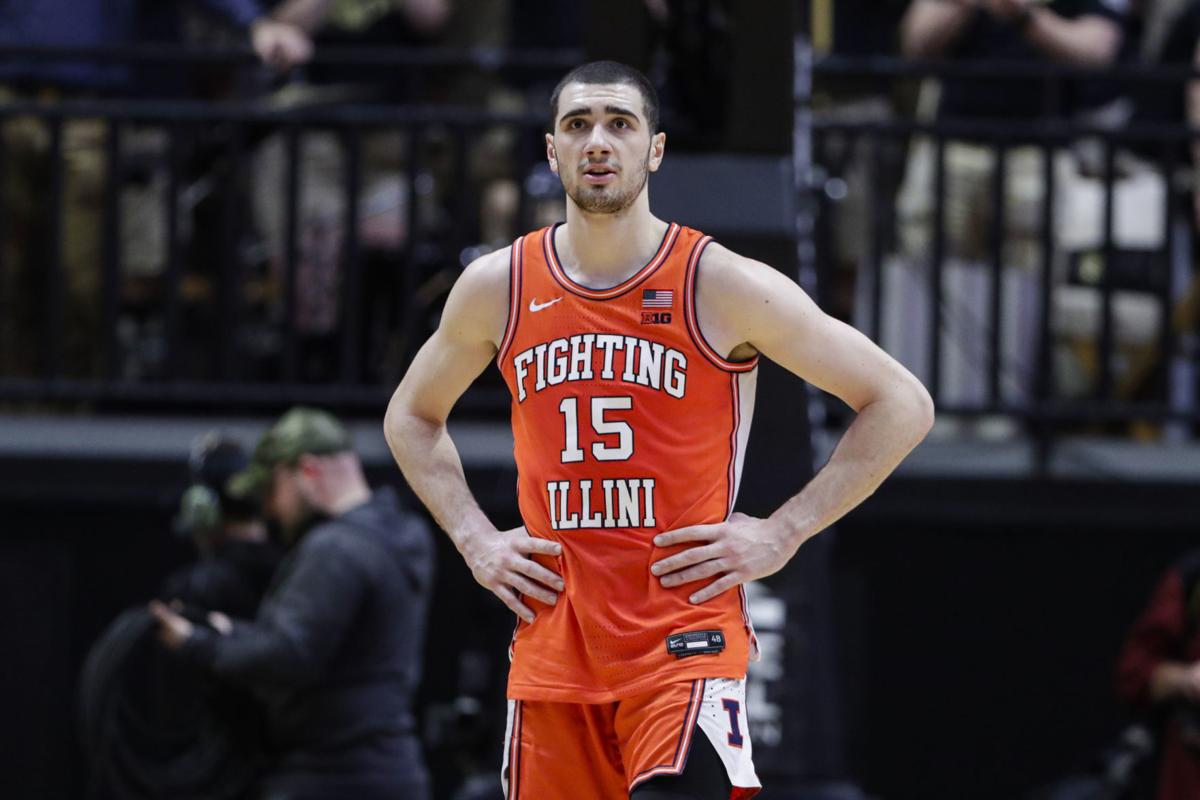 CHAMPAIGN — Just before 10 a.m. on Friday morning, Giorgi Bezhanishvili was in the Ubben Basketball Complex working on his 3-point shot.

He stood shirtless in the corner and released triple after triple. It's a practice that has been a staple for Bezhanishvili, a sophomore forward on the No. 21-ranked Illinois basketball team. He estimates he gets up 1,000 3-pointers each day and his teammates and coaches corroborate it.

Mostly, though, opposing teams still aren't concerned — or don't appear to be.

Entering Tuesday's win at Purdue, Bezhanishvili was 8-for-26 from behind the arc. The Boilermakers, in fact, paid no mind to the 6-foot-9 Bezhanishvili on the outside. He was left wide open in the first half before picking up his second foul with 16 minutes left before the break. He faked a couple of shot attempts, but didn't pull the trigger before foul trouble stuck.

In the second half, Bezhanishvili was open and let 'em fly, making 2-of-3 triples. When a defender has to honor his shot, everything opens up for the Illini (14-5, 6-2), who play at Michigan at 11 a.m. Saturday with a five-game winning streak and a chance to take sole possession of first place in the Big Ten. Illinois will be without Alan Griffin, who was suspended for two games by the Big Ten for stepping on Purdue's Sasha Stefanovic.

He's now made 10 3-pointers this season, but has expanded his game out of the post in the last two. Against Northwestern, he hit a few baseline jump shots to force Wildcats coach Chris Collins' hand on defense.

“I think it’s great for the team," Bezhanishvili said. "If players are still not going to guard me, I’m going to keep shooting. Obviously I made a couple now and I feel like I will make them. It’s really great for our team that the defender will not be sitting in the paint anymore, hopefully. If they are, then we knock down more shots; that’s it."

Bezhanishvili is confident in his 3-point shot, and not just because of in-game success. Those kinds of successes are nice, but because he firmly believes in how much work he's put in on those particular shots.

“Every single day I work," he said. "I’m always confident in myself in the way of I look at myself in the mirror every night before I go to sleep. I’m like, ‘I worked today. I busted my (butt).’ It’s not that I’m coming out and I’m shooting those 3s and I’m missing them and I haven’t worked on it.

"When I come out and I make them, I’m happy because I worked hard. If not, I’m just going to keep working."

When that shot has to be honored, it opens up Bezhanishvili's passing game. Each of his entry passes into the post differ from the next. It's an innate skill he's developed over his career, and being a big man who plays in the post doesn't hurt him in understanding how to deliver each pass in the perfect way. Bezhanishvili is tied with Trent Frazier for third on the team with 39 assists.

Consider freshman center Kofi Cockburn, the chief benefactor of Bezhanishvili's passes, and in turn, what happens when a defense has to honor the sophomore as a shooter.

“It opens it up a lot because Giorgi is one of the best post passers I’ve seen in my life," Cockburn said. "When he knocks his shots down and guys have to guard him, it makes it so much easier for him to pass the ball in the post and for the spacing to be right when I can make a move."

The evolution of Bezhanishvili and Cockburn playing together and understanding how to play off of one another has been a part of the current five-game winning streak and appearance in the Associated Press Top 25 rankings for the first time since 2014 — along with the stellar play of Ayo Dosunmu and Frazier.

If Bezhanishvili's shot is consistent enough to be honored by defenders, it opens up yet another avenue of scoring for the Illini.

“He’s shot a million of them," Illinois coach Brad Underwood said. "We all know how good of a passer he is, he’s an elite passer. The high-low stuff is a big part of what we’ve been trying to accomplish all year. His ability to space and knock those down, he’s also got the ability to put the ball on the floor, those things become very big in terms of spacing the court for us.

"He’s capable, man. He’s got the green light. When he’s using great judgement of when to take them, we’ve got a nice high-low situation that we can go to with that."

OF NOTE: The Illini are looking to snap a five-game skid in Ann Arbor spanning nearly 10 years. Illinois' last victory at Crisler Center was a 51-44 victory on Feb. 23, 2010. ... Michigan has lost three straight games and four of its last five. ... Wolverines second-leading scorer Isaiah Livers has missed the last six games and his status for Saturday is unknown. ... Illinois owns its longest conference winning streak in seven years, since also winning five in a row from Feb. 7-21, 2013. Illinois has not won more than five straight in Big Ten play since setting a school record with 25 consecutive conference wins spanning the 2004 and 2005 seasons (Jan. 31, 2004-March 3, 2005).

Unlike many past Illini teams that sputtered early and kept on sputtering, this Illini team has changed, improved and evolved. More thoughts from Mark Tupper >>>

ROSEMONT — Illinois sophomore guard Alan Griffin has been suspended two games and will miss Saturday's game at Michigan and a Jan. 30 home gam…

Ask Illini coach Brad Underwood how his team wins on the road and he's got an answer for that — toughness.

Trent Frazier knew that his team would have to sustain punch after punch from Purdue, would have to pick itself up off the floor and swing back if Illinois wanted to go into Mackey Arena and walk out with the program's first win in West Lafayette, Ind. since 2008.

Frazier scored a team-high 16 points on 5-of-11 shooting to help No. 24 Illinois hold off Northwestern with a 75-71 win on Saturday at the State Farm Center.

Ayo Dosunmu scored the final eight points for Illini on Saturday in their win against Rutgers.

It's as if Ayo Dosunmu wasn't willing to simply walk out of the Kohl Center on Wednesday night with a loss.

CHAMPAIGN — From among trees, Alan Griffin emerged; time and time again. Each time breaking through with the little orange ball, a reward for …

Illinois basketball moves up to No. 19 in Associated Press poll

The Illini have a six-game winning streak and are ranked No. 19 in the Associated Press Top 25.

'He means a lot to me,' Illinois basketball players react to death of Kobe Bryant

"It hit me hard when I found out he died. I tried to not get sad about it, just cherish his legacy and go harder for him." — Ayo Dosunmu

Another tough test ahead for Kofi Cockburn when No. 19 Illinois travels to No. 18 Iowa

'We didn't forget,' No. 20 Illinois hosts No. 9 Maryland for first place in Big Ten

Illinois carries plenty from a Dec. 7 conference-opening loss at Maryland, where it led by 15 points in the second half.

Illinois forward Giorgi Bezhanishvili (15) has been good in the post in his college career, but his 3-point shot can open doors for the offense.