Biden 'bringing back the pros' for virus briefings; no holding down New Orleans; and more virus updates 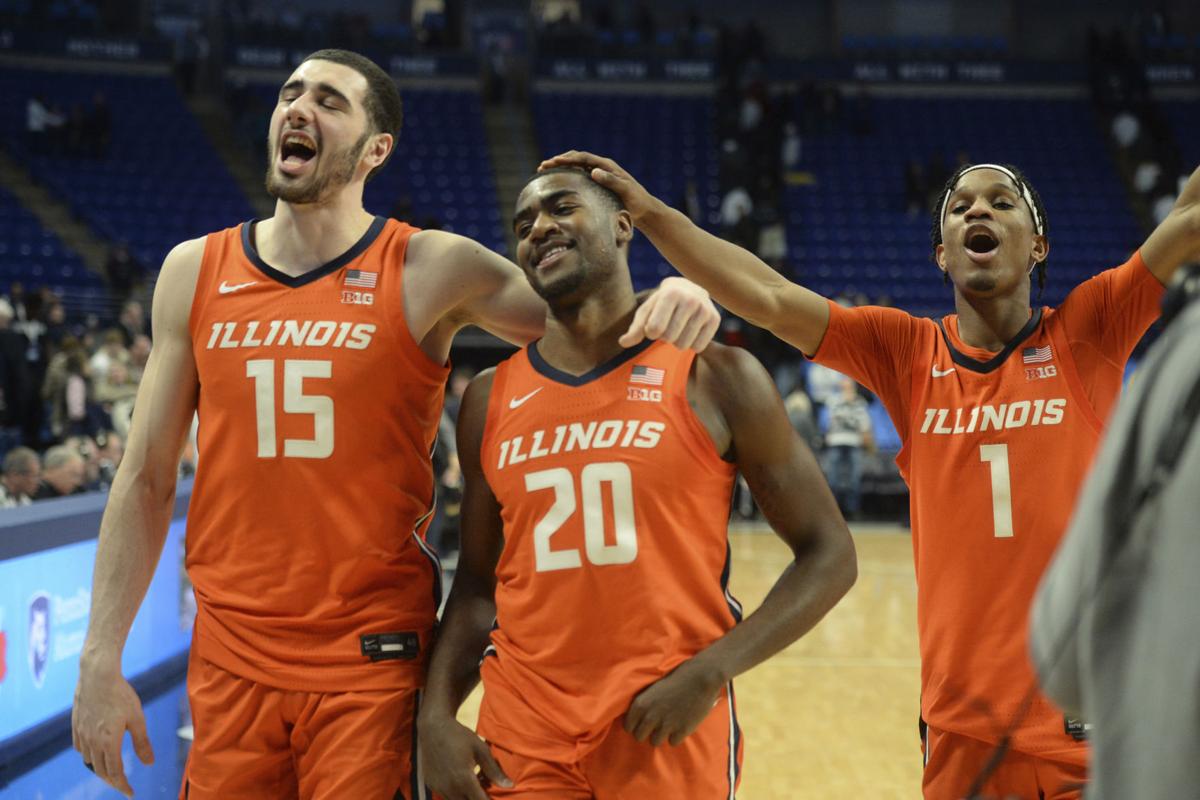 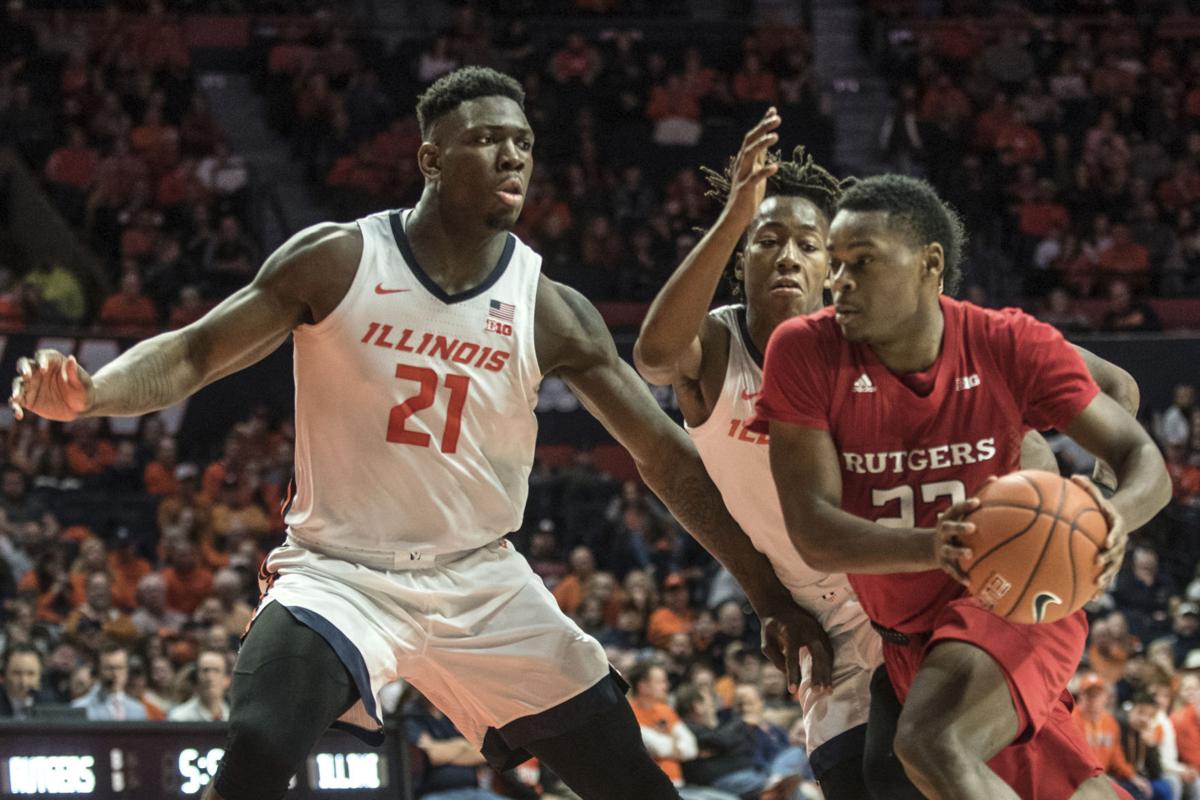 Rutgers' Montez Mathis (23) drives to the basket as Illinois' Kofi Cockburn (21) and Ayo Dosunmu (11) defend. Both Cockburn and Dosunmu have decided to return, making the Illini a roster with elite talent.

CHAMPAIGN — Brad Underwood isn't afraid to say he's still coming down from the emotional high of a weekend where two of his top players elected to withdraw from the NBA Draft and return to school.

The back-to-back announcements from Ayo Dosunmu and Kofi Cockburn to return to school vaulted the Illinois men's basketball program up the national pre-season rankings and has expectations sky high.

But it isn't just Dosunmu and Cockburn that will elevate Illinois to what Dosunmu brazenly hoped was a national championship in Indianapolis. The Illini have four players (Dosunmu, Cockburn, Adam Miller and Andre Curbelo) who were Top-50 ranked players in the country according to the 247Sports composite rankings, and the 2020 recruiting class is ranked 17th in the country and third in the Big Ten, according to 247Sports. The 2020 class also includes three-star forward Coleman Hawkins, who Underwood mentioned several times in an hour-long Zoom interview on Monday, and 7-footer Brandon Lieb.

Combine that with the returns of Trent Frazier and Da'Monte Williams for their senior seasons, and Giorgi Bezhanishvili for his junior season, and Illinois has some firepower. Underwood praised guard Austin Hutcherson and forward Jacob Grandison this offseason after both sat out and improved their bodies while learning the system last season, per NCAA transfer rules. Benjamin Bosmans-Verdonk has a Big Ten-ready body but was injured most of last season, and Jermaine Hamlin, who spent last season battling with Cockburn in practice, are also part of the roster.

Speculation on the starting five is running rampant on social media, but Underwood hasn't spent much time thinking about all of those options in the last month. That kind of thinking can being to ramp up now that he knows what the roster will look like.

He knows he wants to play faster and that the team will shoot better, but there's plenty of time to get into all of that.

"Ayo’s now 2-3 years into this in the weight room and stronger, and he gets to do that against his peers and that becomes a huge factor," Underwood said. "Now you see Trent, you see Da’Monte now as seniors and both of them for the most part as four-year starters. Now Giorgi is a junior and Kofi is no longer a freshman. It kind of reminds me of an old-school team and I’m excited for our fans.

"Deep down, you know this is what you were looking at when you took the job. This is where you know you can be and I’m excited about that."

It's not simply the talent and experience that Underwood is excited about. There's a versatility about the Illini. Underwood could run a "small ball" lineup with Hawkins as a center around four guards. Underwood got comfortable with a four-guard lineup last year when he moved Williams to the power forward late in the season and used Bezhanishvili, who struggled at times playing alongside Cockburn, as the team's backup center.

Perhaps Underwood could run a jumbo lineup with Dosunmu, Miller Hutcherson, Bezhanishvili and Cockburn. The options are there and the team seemingly has better shooters than last season with Hutcherson, Miller and Curbelo and Hawkins in the fold along with Frazier. Illinois was last in the Big Ten in 3-point field goal percentage at 30.9%.

There are plenty of options on the table.

“The thing I really, really admire about this team is their skill set and their versatility," Underwood said. "Kofi is who Kofi is. The rest of our guys have some versatility in the movement and the places they can play on the court. We’re going to see a guy in Kofi who is going to have an expanded range. He’s proven he’s a very good 15-17 foot shooter and he’s worked very hard at that. I love the versatility of this group."

As sports begin to resume, with the most success coming within a bubble, Underwood understands depth will likely be key when and if the college basketball season begins. Illinois' depth and talent bodes well for any upcoming season.

"I think as we have seen a little bit with the bubble with the NBA, we have seen it with the TBT, I think you can fully expect to play games this year without your full roster," Underwood said. "I think depth becomes a big part of this and how that works.

"Playing time always works itself out on the court with depth. I am excited. I can’t wait for practice. We’re going to have some incredibly competitive practices. Our guys have worked really hard this summer and there’s a great chemistry I really have admired this summer to this point. We’ve got a little time to figure all that out. I think it’s going to be a real advantage to have depth as this season moves forward."

There’s no need to replace the man in the middle in Champaign.

BenFred: Illinois legend Henson's impact on Underwood will live on

Brad Underwood had just stepped off the practice court Thursday morning, but his mind was at the bowling alley, where he and the man he calls …

Football and men's basketball student-athletes are scheduled to arrive first, in small groups over a series of days in early June.

Illinois basketball coach Brad Underwood on the Adam Miller, Andre Curbelo pairing, 'It's going to be fun to watch'

Andre Curbelo will join the Illini as a highly regarded four-star guard and is already envisioning what life will be like while sharing the floor with fellow four-star guard Adam Miller from Morgan Park.

Jonah Kramer had a pretty good idea he was about to get a semi-personal, virtual workout with Giorgi Bezhanishvili on Monday night. He just had to be ready.

Brad Underwood hasn't really thought much about the comparison between Adam Miller and Ayo Dosunmu.

NCAA hands authority to decide on fall sports to each of its divisions; Divisions II and III cancel

The NCAA gave the power to make decisions on the fate of fall sports to each of its divisions.

Ethan Willoughby fielded offers from Southeast Missouri State, Ball State and Illinois State, but it was the personal connection with ISU that made Willoughby choose the Redbirds.

Rutgers' Montez Mathis (23) drives to the basket as Illinois' Kofi Cockburn (21) and Ayo Dosunmu (11) defend. Both Cockburn and Dosunmu have decided to return, making the Illini a roster with elite talent.