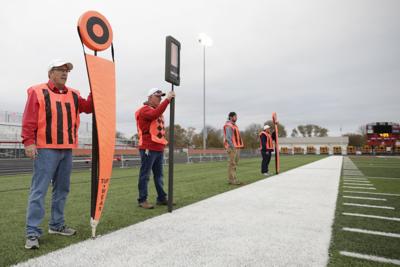 DECATUR — As high school football season moves through the playoffs, the orange vest-wearing crew members who run the down-and-distance markers on the sidelines may be the most overlooked part of the gridiron match-ups.

They're called the "chain gang," and while players get the cheers and referees make the calls, they're the ones letting everyone know what down it is and keeping track of those all-important inches that football games can sometimes come down to.

It’s often a sought-after gig, even though there’s a serious risk of being slammed into and requirements include weathering heat and cold, lugging big orange markers for four quarters and having eagle-eye precision, from snap to tackle. The perks: Being close to the action and a deep sense of camaraderie.

“We have a saying at Mount Zion: To get on the chain gang, somebody has to die,” said Jerry Underwood Jr., who is going on 28 seasons. “That means, once you're on the chain gang, you're not getting off unless you volunteer to get off, because we have people step up every year.”

The crews are part of the officiating team and are posted on the visitor’s sideline. High schools coordinate who fills the roles during home games.

Three members are usually needed to make a full crew, which includes two "rod man" members that hold the "forward rod" and "rear rod," also known as "sticks." The "box man" marks the line of scrimmage and keeps track of the current down.

A chain measuring exactly 10 yards, the distance needed for the offense to obtain a first down, separates the two rods. As the offense continues its attempt to pass the first-down line, the box man will continue to adjust marking the line of scrimmage.

Hassan Helm, 47, has worked the chains at MacArthur High School for about 15 years. A 1990 graduate, he was quarterback and defensive back, and was Herald & Review County Football Player of the Year. The Ameren supervisor revisits the glory days by working on the crew and said watching games now from the sideline beats the view from the stands.

"We spend a lot of time talking to kids on the other team as well as the kids from our team, trying to let them know, you know, just because you're down doesn't mean the game's over," Helm said. "We're just there for the excitement of the game.”

Sam Knox, assistant executive director of the Illinois High School Association, said while some chain gangs get paid, most are just there to help.

"Just like any volunteer, they are vital to the overall program," said Knox, whose organization oversees games.

Longevity is a common trait.

Duane Chandler, 63, has been on the Maroa-Forsyth squad for 22 years, ever since his son, Nathan, was on the team. The Caterpillar retiree became manager after leader Larry James died following 55 years of being on the crew.

Chandler works as the crew's "box man," a position that is required to communicate the most with the officials and other crew members.

Adjusting the pace of the game is something that comes naturally, Chandler said. The management position has showed him patience and leadership, as well as affording opportunities to make long-lasting relationships with the officials. Serving as chain gang manager is “an honor,” he said.

“It taught me to be more calm on the sidelines. The difficult part of it is when Maroa, or the other team, is running at a high powered offense, you have to keep up,” he said. “I mean, I'm in pretty good shape for 63 years old.”

Underwood, 58, said that members of the coveted Mount Zion crew won’t surrender seats either. His dad, Jerry Underwood Sr., died in June and had been on the chain gang for 44 years. The players this year wore a "JPOPS" sticker on their helmets in honor of him.

The younger Underwood graduated from Mount Zion in 1979 and was a running back and tail back.

That connection to the team and family bonds can make a challenge out of remaining neutral.

“I think the biggest challenge is keeping your composure when things don't go your team's way; you have to keep your mouth shut,” Underwood said. "I think it gives you a little more appreciation for the officials and how they handle different situations."

Said Underwood: “Especially the box man, that's a little more precise, you have to be a little more in the game and you have to know what down it is, too, so the fans don't holler at you since you're on the wrong down.”

Compared to the Underwoods, Chad Reynolds, 46, is a relative newcomer on the Mount Zion squad, at seven years. His experience has been gaining a better understanding of the sport.

“It gives you a little bit more respect for the game, you know, sitting in the stands versus sitting right on the sideline,” he said. “You see it in a different view; you get to see how other teams and coaches react.”

Still, there are risks.

The crews stand through various conditions, from blistering heat to toe-numbing cold all season long, risking collisions from plays gone haywire wearing nothing but orange vests as protections.

Playoffs at a glance: A breakdown of all the Decatur-area second-round playoff matchups

Jerry Seeforth, 69, a crew member for Eisenhower High School games, said collisions are a fact when you’re that close to players.

“When they start running your way, just drop the pole and get the Sam Hill out of the way," he said.

In one game, Seeforth said, "I ran into a kid about three times my size. He picked me up, swung me around and set me back down.”

Said Underwood: “I've gotten my legs taken out from me a couple of times. The kids are faster now than they were 28 years go. That'll get your head on a swivel."

As local teams battle through the playoffs, the one constant will be the accurate eyes of the chain crew. In a game of inches, they’re the ones doing the measuring.

Knox is with the IHSA now but also spent time officiating football and was athletic director at Lincoln High School. He said there’s no question chain gangs are crucial to the game.

"That's a role, once people get in that position, they really enjoy doing year after year and helping at the local high school,” he said.

"When you think of modern technology and all the ways we watch sports,” Knox said later, “it always amazes me that we use the traditional chain we've used for decades.”

⏰ Will you remember to set your clock back? Illinois legislation would make daylight saving time permanent

If state Sen. Andy Manar has his way, the clock-changing that came with daylight saving time ending this weekend will be on borrowed time in Illinois.

Decatur windchill may hit 5 below on Tuesday

The icy blast that coated roads in ice and sent vehicles spinning Monday is now expected to drop the temperatures to a dangerous level.

MacArthur's Carin Houser found her niche on the stage at MacArthur High School and is directing the production of 'Charlie and the Chocolate Factory.' 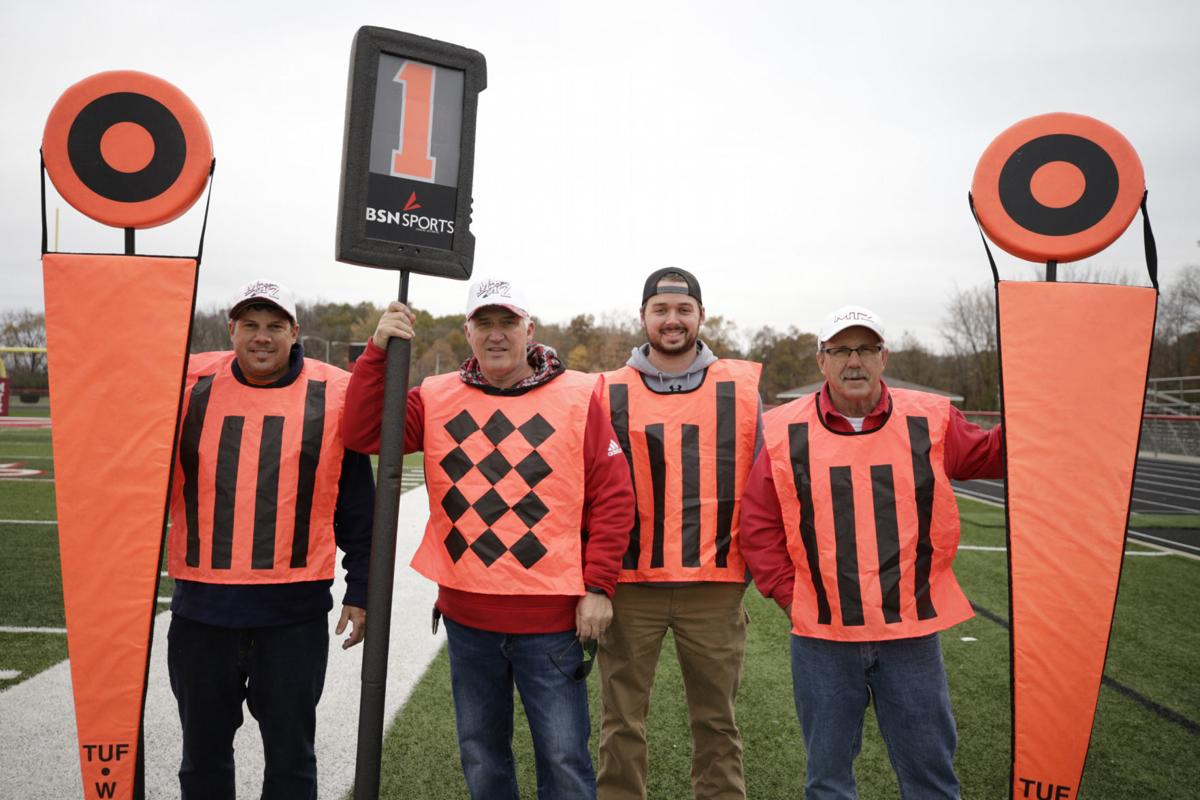 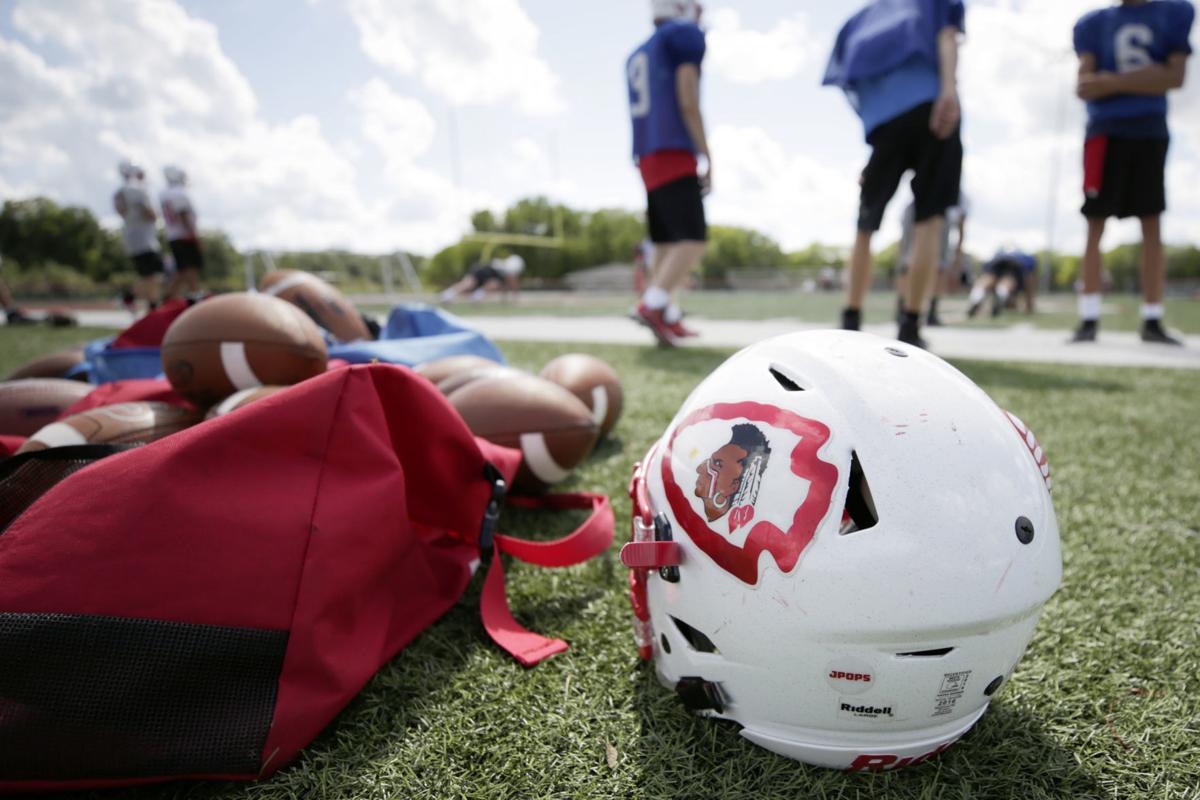 A Mount Zion High School football helmet with the sticker "JPOPS" is shown during a practice in August. It is in honor of longtime "chain gang" member Jerry Underwood Sr. 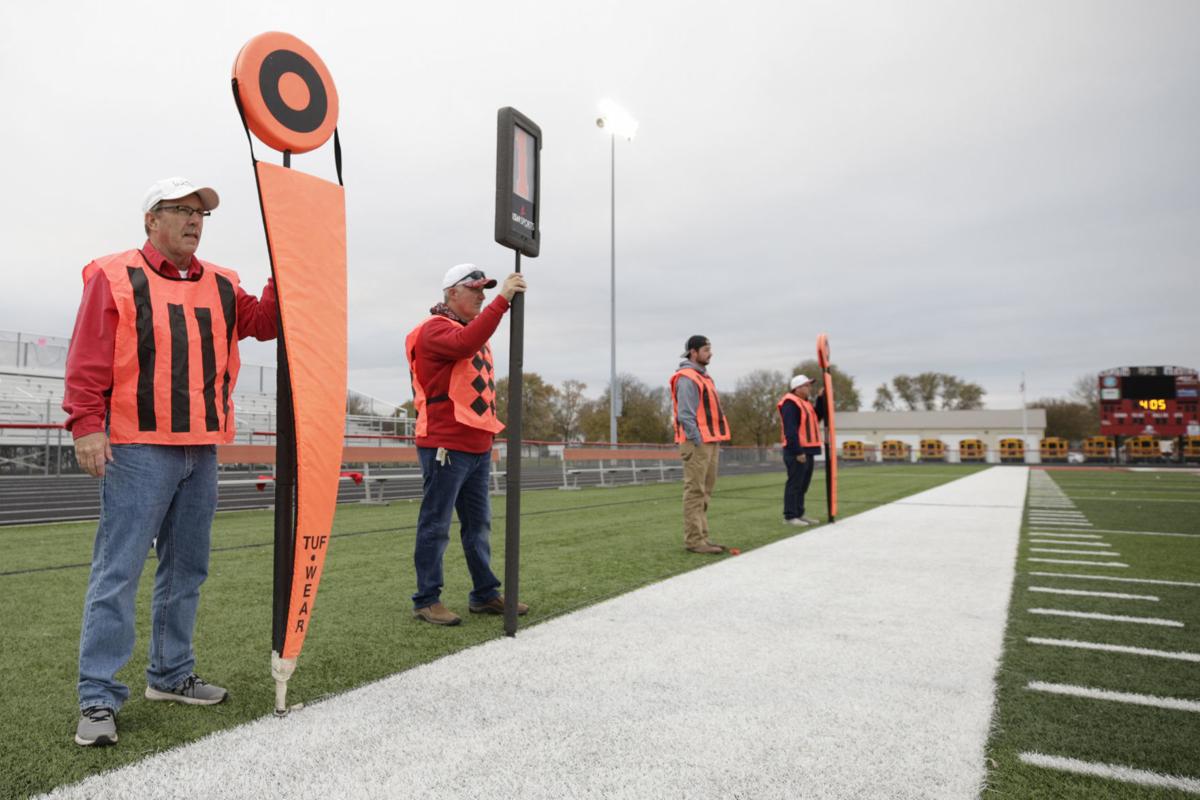 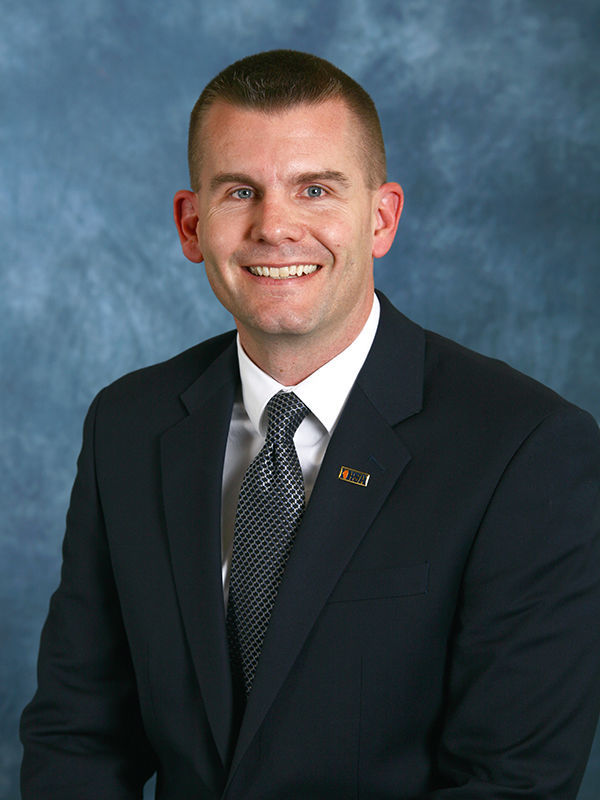