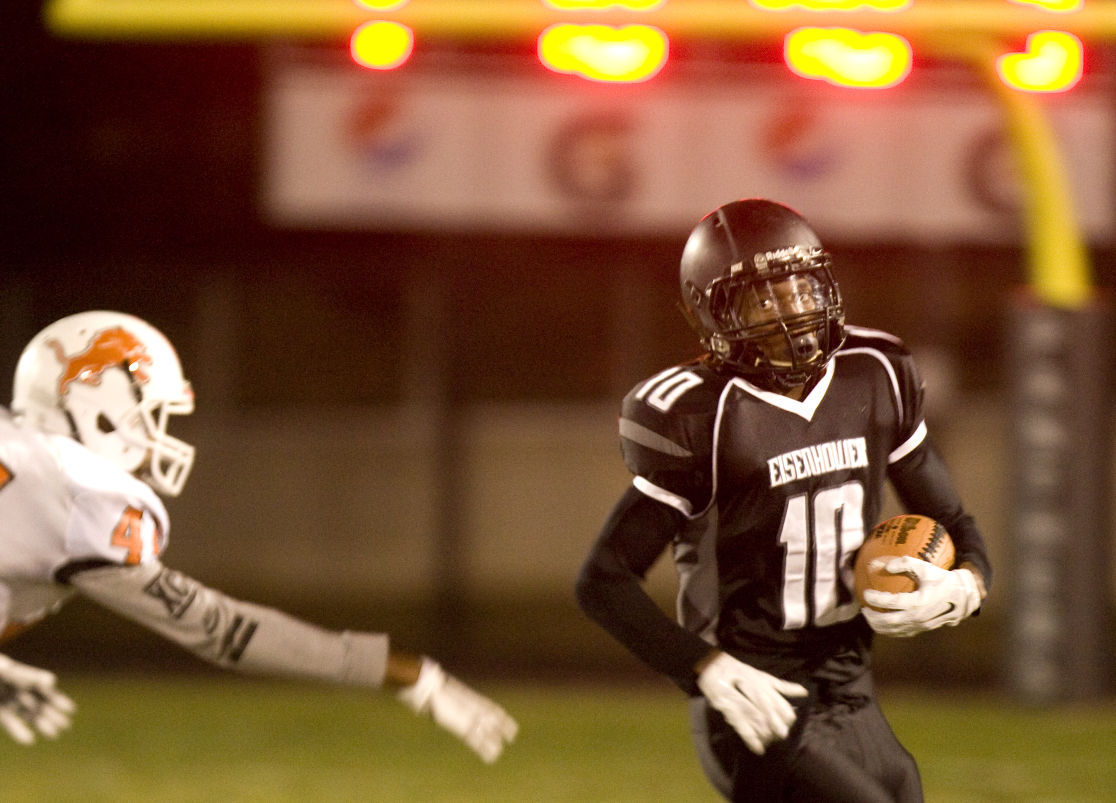 Stephon Jarrett eludes a tackle as he carries the ball for Eisenhower during a Central State Eight Conference game against Springfield Lanphier. Online gallery at herald-review.com/gallery 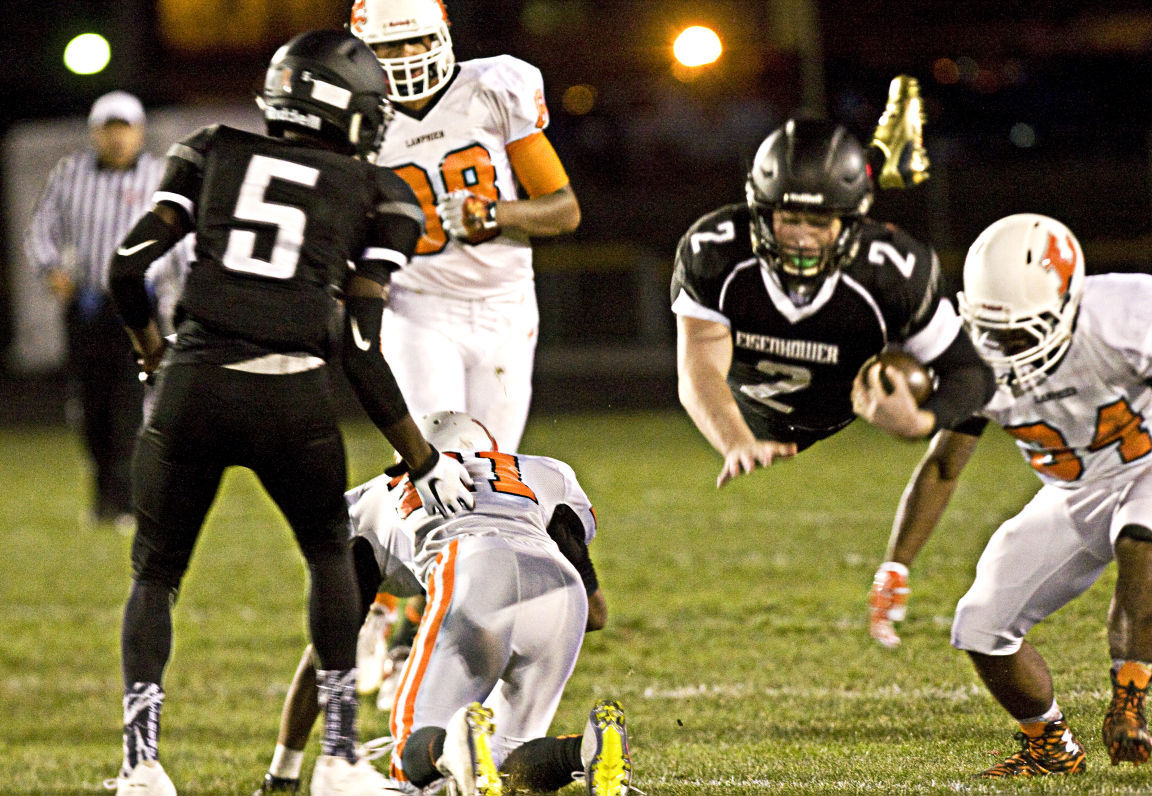 Eisenhower quarterback Cayleb Dehority flies through the air as he goes for extra yardage in the first quarter of Friday night's game.

DECATUR -- For four quarters, Eisenhower looked like a team used to winning, weathering an early push from Springfield Lanphier before swatting the Lions in a 46-14 win on Friday.

But as the lights went out for postgame homecoming fireworks, with Cayleb Dehority and Colton Lockwood standing next to each other looking up to the sky, Dehority shouted to his teammate, "We're 4-2. We're 4-2."

The Panthers are now one win away from their first playoff appearance since 2004 and have their first four-game winning streak since 1992.

"We haven't had this here for a long time -- it feels great," Lockwood said.

Dehority said he was just happy to be a part of it.

"I'm glad we're bringing Panther football back," Dehority said. "People are actually excited to come watch us play, our crowds are huge and now we're one win closer to the playoffs. It's pretty great."

It was the Dehority-to-Lockwood combination last year that clicked during the season-opening game vs. Rochester and announced that the Panthers wouldn't be pushovers in the CS8.

This year it's been a much more consistent connection. While Lockwood was quiet last week against Jacksonville, he exploded against Lanphier for 182 yards and three touchdowns on six catches.

"I was finding open field and getting to it, and he was hitting me," Lockwood said. "That comes from a lot of offseason work. We got together this summer and threw a lot of balls and really got it clicking during seven-on-sevens."

For the game, Dehority threw for 320 yards and five touchdowns, and also rushed for a score.

"We have so many athletes on the field that I don't know that there's anybody that can hold down every single one of them," Dehority said.

The first quarter was a little scary for Eisenhower. Lanphier put pressure on Dehority on Eisenhower's first possession and early in its second. Offensively, Lanphier bowling ball Reggie Dickerson (5-8, 214 pounds) had seven rushes for 71 yards and a touchdown to give the Lions (2-4) an 8-0 lead on Lanphier's first possession.

But offensively, Eisenhower made an adjustment in its protection and Dehority hit Lockwood for a 50-yard touchdown on the first play he had time to throw.

"We started fanning with the line and keeping Salat (Al-Nurridin) back there for extra protection," Dehority said. "Then we got our groove with the passing game in the second quarter and came out and finished the game."

Defensively, Eisenhower held Dickerson to 38 yards rushing the rest of the game.

"He's no joke. He's a load," Eisenhower coach Drew Wagers said. "We game-planned for him, but there's no way to simulate him in practice.

"We had to get 11 guys to him to tackle him. We had to move some guys around and funnel him where we wanted him to go, but the defense did a great job adjusting."

Lockwood was held to just one catch for 1 yard against Jacksonville last week, but after his game against Lanphier is the leading receiver in the area with 618 yards.

"Last week, he couldn't get it working, so all week leading up to the game I told him, 'You got to have a big night for us,' " Wagers said. "He's worked so hard for four years, it's good to see him break out. A lot of that tonight was just him. He's spectacular."

Stat of the game

With Lions starting quarterback Joe Varela and his backup Andrew Powell out with injuries, Lanphier quarterbacks A'Jonte Lee and Zach Ashton combined to go 2-for-11 passing for 0 yards and two interceptions.

The Illinois High School Association rule book is clear: No schools are allowed to recruit students to play for their athletic teams.

From just to the right of the hoop, Addie Fyke laid on the floor in dismay. She had to process the reality that her layup just above and to the right of the rim, bounced off the glass and fell safely through the net as the fourth-quarter buzzer sounded in the background.

Stephon Jarrett eludes a tackle as he carries the ball for Eisenhower during a Central State Eight Conference game against Springfield Lanphier. Online gallery at herald-review.com/gallery

Eisenhower quarterback Cayleb Dehority flies through the air as he goes for extra yardage in the first quarter of Friday night's game.