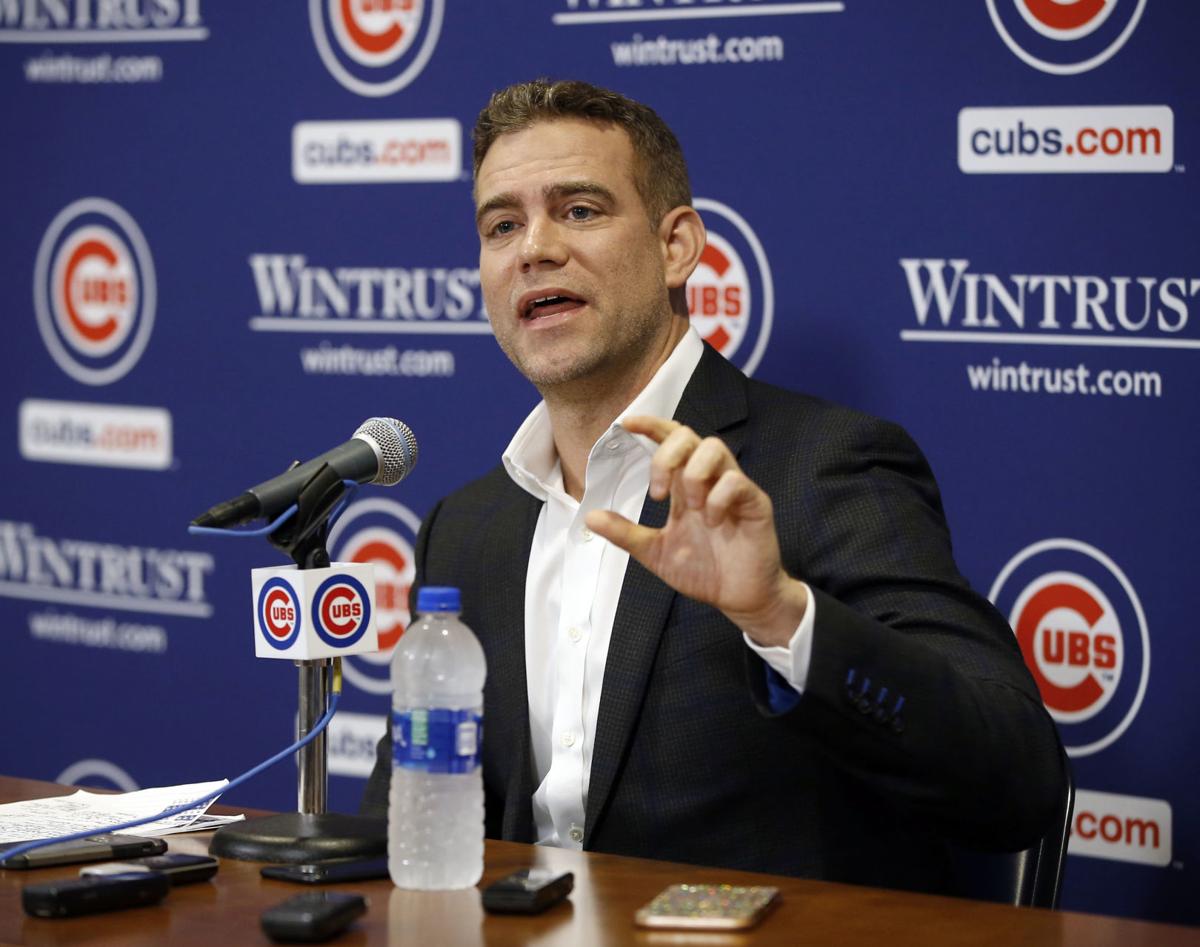 Chicago Cubs president of baseball operations Theo Epstein gives a closing news conference for the season at Wrigley Field on Monday in Chicago. 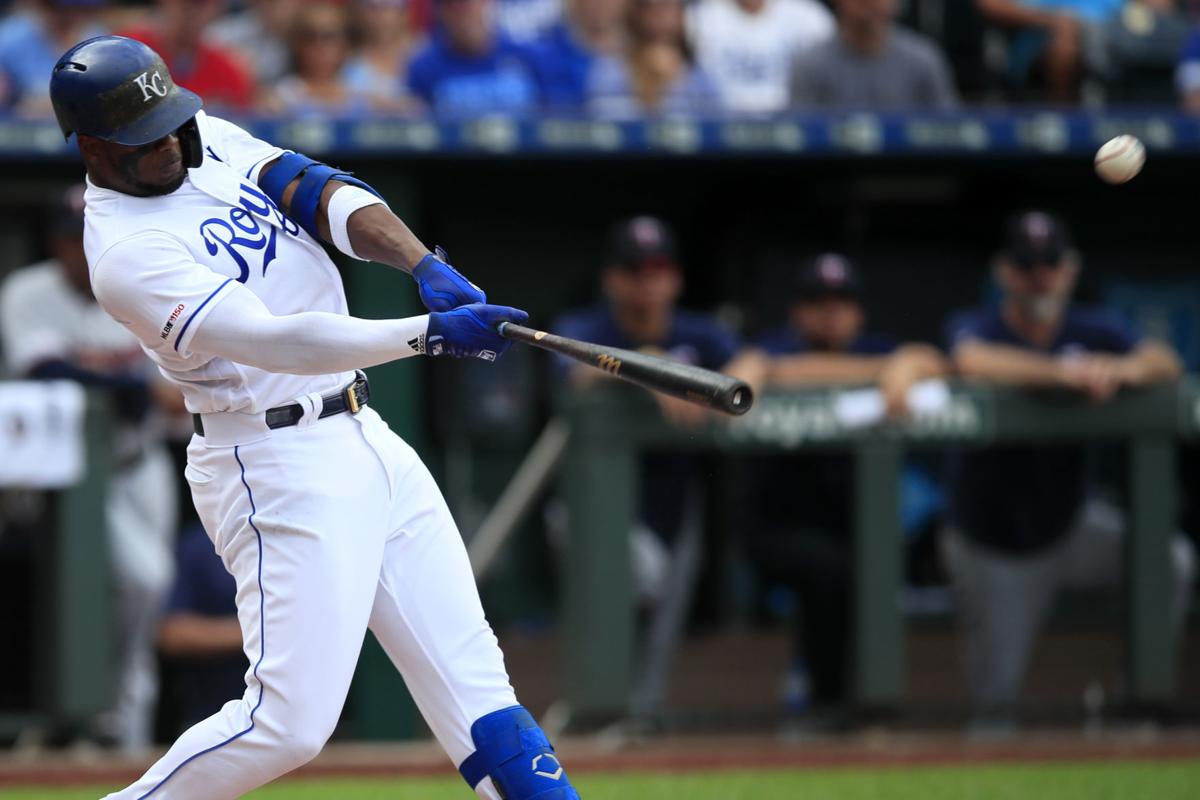 A wide assortment of characters have inhabited the Cubs manager's office over the decades, with varying degrees of success.

No single personality trait, defined intelligence level or preferred amount of experience translates into the perfect Cubs manager, or else President Theo Epstein could simply insert the variables into a computer program and come up with the right blend for his next hire.

But based on three decades of covering the Cubs -- and a lifetime of watching them -- these are the eight main ingredients to create the quintessential Cubs manager, and the ones who best fit the mold in each category:

No one looked like a manager more than "Popeye," whose well-defined gut was a staple of skippers in the made-for-polyester 1980s.

"No baseball figure, other than Yogi Berra, is more cartoonish than Zimmer," Tribune columnist Bernie Lincicome once wrote. "He is a joyous poster for the game, chaw-jawed, bandy-legged, fiery-cheeked. This is a living fungo. This is a manager."

At 5-foot-8, Zimmer was listed at 175 pounds in the 1989 media guide. But he was well over 200 pounds and decided that summer to go on a diet for a Nutrisystem ad campaign.

"What happens is you lose the thing, then you start eating and it comes back again," Zimmer said of his years of dieting.

He reportedly lost 15 pounds by October, earning the nickname "Slimmer Zimmer." And in a beautiful example of having your cake and eating it too, Zimmer also appeared in commercials for Popeyes chicken and got permission from Nutrisystem to go off his diet, but only for the fried chicken. Some experts believe the declining body-fat percentage of modern managers is ruining the game.

When he arrived in Chicago in 2007, "Sweet Lou" had 19 years of managing experience under his belt. He was given a $136 million center fielder in Alfonso Soriano, who Piniella discovered in spring training could not play center. Two weeks into the season, Piniella politely asked Soriano if he wanted to move to left.

"I told him: 'Look, we'll move you. We want to make it as easy as possible for you to be comfortable at home plate. Take that load off.' He said: 'No, I feel good. I really do.' I haven't been displeased with his play at all. The only thing I say is we brought him in here to hit, and if center field is causing a problem, we want to eradicate that."

It took a little more convincing, but Piniella soon got his wish.

Piniella knew how to manage a game, but one move backfired during the 2007 postseason, when he was criticized for removing Carlos Zambrano for Carlos Marmol after six innings in a 1-1 tie with the Diamondbacks in Game 1 of the NL Division Series. Marmol gave up a go-ahead home run to Mark Reynolds in a 3-1 loss.

"Hey, listen, you guys, this is only the first game," an exasperated Piniella told the media. "There's a lot of baseball to be played in this series. Let's not gloom-and-doom this thing."

The Cubs were swept, and Piniella was ripped for looking too far ahead. In 2008 he became the first Cubs manager with back-to-back playoff appearances since Frank Chance took them to three World Series from 1906 to '08.

"I know what I'm doing," Piniella often said when questioned about strategy. More often that not, he was right.

The personable Baker never liked the term "players' manager," feeling the implication was that he wasn't as good at in-game managing. But no one had his players' backs more than Baker, especially when they were feuding with broadcasters Chip Caray and Steve Stone during the 2004 collapse.

Baker particularly liked bringing food to his players. When first baseman Hee Seop Choi was hospitalized in 2003 after a collision with Kerry Wood, Baker delivered sushi to his hospital room. During the 2003 NL Championship Series, Baker drove out to the West Side to pick up soul food from MacArthur's, ordering 10 complete dinners, including meat loaf, pork chops, baked chicken, fried chicken, short ribs, turkey legs and sides of yams, mashed potatoes, collard greens and macaroni and cheese.

"When I bring food in, that's not really being a friend," Baker said. "That's really an investment of energy so they can play better. ... Come the sixth or seventh inning, if you go from first to third and you have wobbly legs, you can tell they're probably not eating right."

The Cubs were well-fed that October but blew a 3-1 series lead to the Marlins to lose the NLCS. Still, you won't find any of his former players with a bad thing to say about Dusty.

The Cubs have been blessed with quotable managers, including Dusty Baker and Lou Piniella. But no one loved to talk more than Maddon. His twice-a-day news conferences frequently ran 15 to 20 minutes, and he often veered off on tangents, from his minor-league managing days in Idaho Falls to a discussion of how many episodes of "The Honeymooners" were filmed.

Even during his final week, when he obviously knew he was not returning, Maddon continued to give the media something to write about, implying his players might win more road games if they drank more beer.

"I'm not accusing them of going out at night because I wish they would," he said. "That's the one part of this game we're missing is that guys don't go out and have a beer and talk about stuff."

Few managers have exited the Cubs with bro-hugs from reporters, but Maddon was a different cat. There might never be another Cubs manager as adept at handling the media.

Even though there's no video of Elia's famous 1983 rant about the "nickel-and-dime" Cubs fans, you can still hear the audio on YouTube.

"I'll tell you one (bleeping) thing, I hope we get (bleeping) hotter than (bleep) just to stuff it up those 3,000 (bleeping) people that show up every (bleeping) day," he began. "Because if they're the real Chicago (bleeping) fans, they can kiss my (bleeping) ass, right downtown, and print it."

Elia went on and on, and the rant is now part of Chicago's rich history of meltdowns. In some towns, having an even-keeled manager like Jim Riggleman in the dugout would be more appropriate, especially in management's eyes. But in a town such as Chicago that always has enjoyed a good street fight, a no-holds-barred manager like Elia is always the preferred option.

Though Trebelhorn lasted only one season, he left his mark on the North Side.

It started when general manager Larry Himes revealed the Cubs had given Trebelhorn a psychological exam before hiring him in October 1993.

"What is unclear is if he passed or failed," Bernie Lincicome wrote.

After a record-setting ninth straight home loss to start the 1994 season, Trebelhorn met with Cubs fans to hear their gripes, holding his so-called "Firehouse Chat" outside the Waveland Avenue fire station an hour after the game. As he entered the street, fans chanted, "Kill Larry Himes," and began screaming questions laced with obscenities.

"If you're gonna yell, don't run off and hide, Slim," Trebelhorn shouted at one fan.

After a half-hour of questions and answers, one fan thanked Trebelhorn for "having the guts" to face the mob. Trebelhorn later said he felt like he was "in the middle of the French Revolution."

No, he wasn't a great manager, but the Firehouse Chat was a brilliant idea.

While Lou Piniella's crowd-pleasing, dirt-kicking tirade against umpire Mark Wegner in 2007 was credited for turning around the Cubs' season, he was so embarrassed about the incident that he wrote a letter of apology and vowed to stop making scenes with umpires.

Franks, who was 63 when the Cubs hired him, never apologized for anything, including his own dirt-kicking episode with umpire Doug Harvey in 1978.

"If it's going to cost me (a fine), I might as well get my hundred dollars' worth, or $200, or whatever it might be," he told radio reporter Brad Palmer afterward. When Palmer asked Franks if he was sorry for the incident, he replied: "No, I'd like to go over and do it once more, right now."

Franks liked to turn his cap around during arguments so he could get closer to the umpire's face. The days of baiting umpires may be disappearing thanks to video replay, but we can still enjoy the classics, and no one did it as well as Franks.

Selling the Cubs is one of the more underrated jobs of a Cubs manager, and few had the gravitas and personality to do it like Durocher.

He famously said, "The Cubs are not an eighth-place ballclub!" when he arrived as manager in 1965, then guided the Cubs to a 10th-place finish in '66. But he became a larger-than-life character when the Cubs emerged from the Dark Ages in the late 1960s. During the memorable 1969 season, Durocher began appearing in Schlitz beer commercials that showed him drinking beer with sportswriters and saying things like, "Have another Schlitz, fellas." Durocher pronounced it "Slits," but no one at the ad agency cared. Ironically, most of the Chicago media hated Durocher, who was rude and averse to truth-telling. After seeing the Schlitz ad, New York writer Dick Young wrote: "Of course, they're make-believe newspapermen."

Joe Maddon had his local ads, such as Binny's, but Durocher was a national presence. He had a real flair for acting, appearing on "Mister Ed," "The Beverly Hillbillies" and other TV shows in the 1960s.

Of the current Cubs managerial candidates, the only one who can match Durocher in self-marketing is David Ross, who appeared on "Dancing with the Stars."

Is Javier Baez too valuable to trade? 3 questions about the Cubs shortstop heading into 2020.

CHICAGO — This is the seventh in a series of position-by-position analyses of the Cubs after the 2019 season.

Should David Ross be worried? 3 questions about the Cubs manager search.

Chicago Cubs president of baseball operations Theo Epstein gives a closing news conference for the season at Wrigley Field on Monday in Chicago. 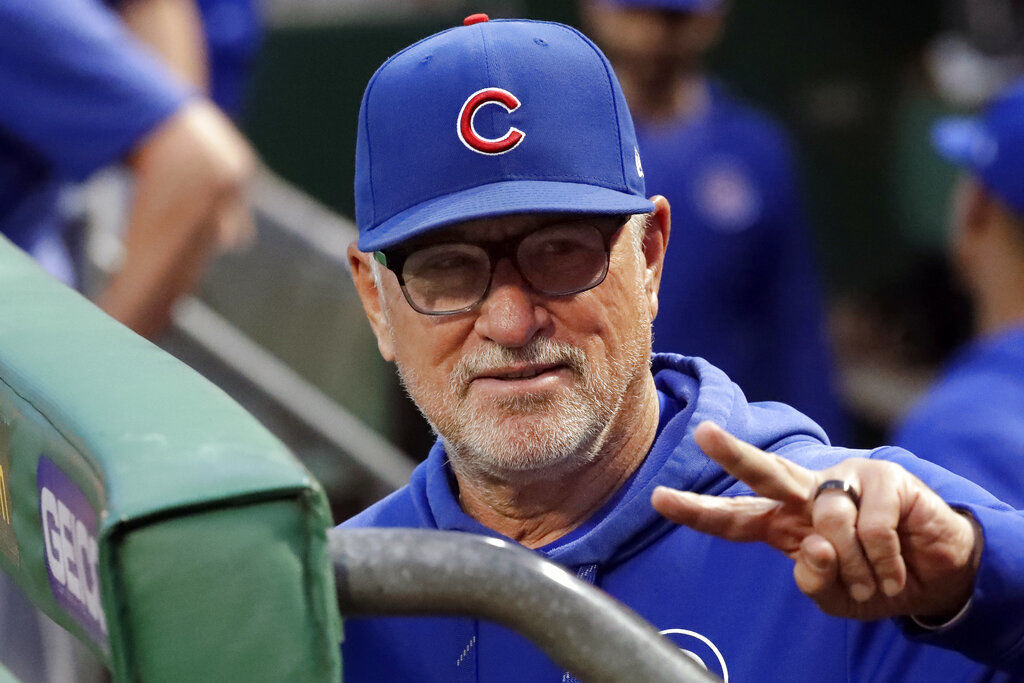 Chicago Cubs manager Joe Maddon waves to a fan before a baseball game against the Pittsburgh Pirates in Pittsburgh, Tuesday, Sept. 24, 2019.